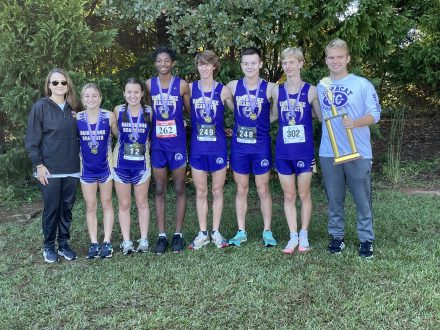 Lady Cat and Bearcat XC Coaches celebrate with the runners after securing a spot at the State Championship meet.

The Bainbridge Cross Country team returned to Albany on Saturday for the Region 1-AAAA Championship, where the Bearcats came out victorious, winning the region championship.

Watts has placed in the top 10 of every race this year, but this region championship, he really put the pressure on himself to win in order to fulfill a promise he had made last year.

Watts wears a black ribbon on his jersey to honor his late principal, Dr. Roy Mathews.

“After my state for track last year, I talked with him and promised him I would win a region championship in XC,” Watts said. “After he died, everyone was sad, because he was a great friend and so I decided to wear a black ribbon to honor him, and I was glad to fulfill that promise to him.”

Watts not only fulfilled his promise but shaved nearly 30 seconds off his previous course record he held in Albany. He previously ran a 17:50.

“I did a course PR and an all-time PR, and that was my goal to have a better course PR,” Watts said.

These times gave the Bearcats a 20-point lead over all other region schools.

“It felt great to win region,” Watts said. “I want to win more during track season; the work is never finished.”

Watts is correct about the work never ending, as the team now prepares for state.

“I’m just trying to keep up my intensity and get as many miles as I can,” he said. “I also don’t want to overwork myself and get injured, though.”

Watts did admit the state course is very hard to prepare for, as it is very hilly.

“You can’t really prepare for it down here, because there aren’t a lot of hills,” he explained.

Watts does not believe he will have to face off against any of his previous competitors, who beat him.

“Most of them were either up a division or from Florida,” he said.

Going into the state championship, Watts said he is not necessarily nervous, but he knows the state competition for XC can be overwhelming.

“There’s a lot of people there and a lot of things going on at once,” he said. “It can be hard to focus, but you just have to remember to run your own race.”

The Lady Cats will also be competing at state, as they took third overall at the Region Championship.

Both the Lady Cats and Bearcats coach are very excited to head to state in Carrollton in November.

Watts is also looking forward to his final race as a BHS student.

“My goal is to hopefully get in the top 10,” he ended. “That’s kind of a big goal, but my main goal is to do the best I can, since it’s my last race and there’s no chance to do it again.”