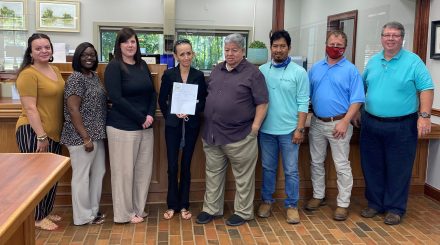 The Cristo te Ama Baptist Church Mission celebrates the paying off of their church property and construction work. The church, located at 1693 Martin Luther King Jr. Drive, no longer has any debt due to the faithfulness of church members to pay the balance of the note ahead of time. The more than $45,000 debt is now history.

The local Bainbridge church is a member of the Bowen Baptist Association and is also affiliated with the Georgia Baptist Mission Board and the Southern Baptist Convention. Pastor Arnaldo Gonzalez is the founding and current pastor and also serves as the pastor of the El Camino Baptist Church in Cairo. The Bainbridge church family worships at 10:00 AM on Sundays, and is the in-person gathering time during the days of the covid pandemic. The name “Cristo te Ama” means “Love of Christ”.

Cristo te Ama’s ministry dates back to 1995 when Rev. Gonzalez was invited to come to this area to help reach the Hispanic community for Christ. Gonzalez and his wife Luz began reaching the Spanish-speaking community and did so from the Jakin Baptist Church in Jakin, GA. He would visit migrant camps and Hispanic families and preach at the church on Sunday afternoons.

His wife Luz would lead music with her guitar and voice, and usually cooked and provided a meal for attending families in those early days. Jakin Baptist was so gracious to be a part of that outreach.

The Bowen Baptist Association secured a mobile unit in the late 1990’s and the ministry moved to US 27 north of Bainbridge. The church grew as many joined the church. In due time, plans were made to build a church for their permanent residency. Under the guidance of Dr. Kenneth Cloud, the Associational Missions Director of the Bowen Baptist Association at that time, the Association and Cristo te Ama undertook the placement of a church building on Martin Luther King Jr. Drive.

The metal building itself was donated. Many churches in the association contributed cover many costs of the building and the building was completed in 2012. The Fellwoship Baptist Church of Brinson was the Sponsoring Church. A dedication service for the Congregacion Hispana, Cristo te Ama was held on Sunday, October 20, 2012. Dr. Charles Holland who had been the Bowen Associational Missionary when Cristo te Ama began, joined Dr. Cloud and other associational church members and the church family of Cristo for the dedication.

The mobile unit was moved to Bettstown Road across from the Franklin Baptist Church. The Nueva Vida (New Life) Baptist Mission, a second Hispanic ministry of the Bowen Baptist Association, meets there. Nueva Vida and Pastor Jesus Bocanegra began reaching the Hispanics and the Haitians in the migrant camps in the area.

The only debt to be owed by Cristo te Ama was for the property and property development. Through the faithfulness of Rev. Gonzalez and the church family, that debt is now gone. The payoff is a milestone for the church family. Hispanic churches usually face greater obstacles in beginning their ministries than do Anglo churches for this reason.

Our Hispanic friends often come from Mexico, Guatemala, and other places where Catholicism is the major religion. They may have never even been inside a Catholic structure, but by cultural expectation, they are considered a Catholic. When they become involved in a church which practices Biblical stewardship, they learn that a church is supported by attendance, prayer, and Biblical stewardship. For those who never attended service and/or gave financially, they were not committed to giving tithes and offerings. In their previous culture, the Catholic structure was simply always there.

We might akin it to our culture where many people are used to seeing a Baptist or other church in their neighborhood, but never attend. They are accustomed to the church always being there, but not realizing the costs associated with a church’s ministry, nor what the Bible teaches about tithing and giving. When we come to faith in Christ, we become a part of a church family and share in the ministry and commitments of that family.

For Southern Baptists, when a new church is started as a mission under the help of a partnering church and/or an association of churches such as the Bowen Baptist Association, a journey of growth and discipleship is begun. These missions agree to the Biblical teachings of Scripture to organize their New Testament church. When the new mission becomes financially self-sufficient and able to stand on their own, the mission becomes a full church. For a Hispanic congregation, that takes a little longer, but as that congregation surrenders itself to Christ, it will happen.

We celebrate this milestone with the Cristo te Ama church family.