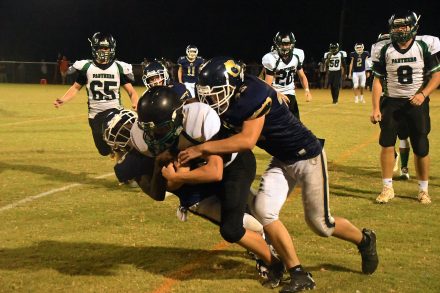 he GCA Cougars, due to last minute circumstances, found themselves facing off against the 11-man Pataula Charter Academy, ultimately losing.

The GCA Cougars had to make a last-minute change to their planned homecoming game Friday night, as their original opponent, Nathanael Greene, had to withdraw due to a tragic auto accident claiming a team member’s life. So the Cougars instead found themselves facing off against Pataula Charter Academy; this is the first time GCA’s eight-man team had faced off against an eleven-man team. Ultimately, the Cougars lost, 46-32.

Highlights of the evening’s offense include junior Jayfus Ferguson, who had a great evening, rushing for 236 yards, and scoring four total touchdowns.

Juniors Kevin Brooks and Reid McCall both had receiving touchdowns.

Junior Corrin McKay had 138 receiving yards, and junior Ben York had a total of 85 rushing yards.

Coach Lance Godwin spoke on the team’s performance in this unexpected match-up. “I thought we played a heck of a ball-game,” he said. “We scored 32 points on a team that was supposed to beat us by 40. They didn’t think we were going to score.”

He continued, saying, “I couldn’t ask for more. The boys played their hearts out. You know, playing eight-man doesn’t prepare us for eleven-man at all, but we played 14 boys on their 30 boys… It’s a great win in my book. I know we lost, but it’s a moral win for us, because it proves we’re ready to take the step to eleven man football.”

The Cougars will be playing an away region game at Vidalia Heritage this Friday, with kick-off at 7:30 PM.