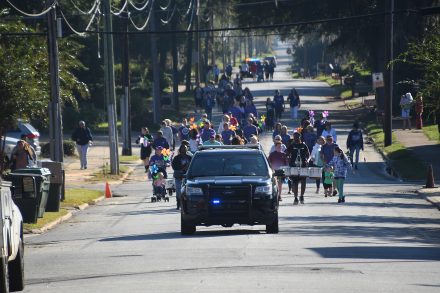 Escorted by BPS and led by the BHS band, participants in the Walk to End Alzheimer’s approach the finish line.

A crowd gathered downtown in Willis Park on Saturday morning for a personal cause, the Walk to End Alzheimer’s. Led by the BHS Band and escorted by Bainbridge Public Safety, members of the BHS AFJROTC also assisted in the walk, which left Willis Park down Broad Street, before turning down Shotwell, before looping back to the square up East Broughton Street.

During the opening ceremony, participants were also greeted with a warm-up exercise led by Pippy Rogers, a laugh yoga instructor and a member of the state board of the Georgia Chapter of the Alzheimer’s Association.

According to Walk to End Alzheimer’s committee member Suzi Bonifay and co-chair Kathy Varner, the event was a success, with an estimated turnout over 100.

“There were 17 teams that were signed up,” Varner said. “The teams consisted of families, who were walking either in memory or in honor of someone in their family who suffers from Alzheimer’s or dementia. There were civic organizations, churches, businesses, all sorts of people who had formed a team.”

As for financial donations and funds raised, as of the writing of this article, the total is $38,912; donations will continue to be accepted until December 31.

“The fact that the community has just responded tremendously, and the fact that we exceeded the goal that was set by the Alzheimer’s Association is just a testament to the giving nature and the generosity of the people in the town, and the organizations,” Bonifay said.

“Personally, they have helped us find doctors, they share information about support groups,” Varner said. “If your family’s in a crisis and says, ‘I know that my father doesn’t need to be driving anymore, it’s dangerous. How do I go about taking these keys from him?’ Sometimes it’s a question like that they’re able to help you with.”

Varner and Bonifay again thanked everyone for their support and hoped the hotline number helps anyone in need.