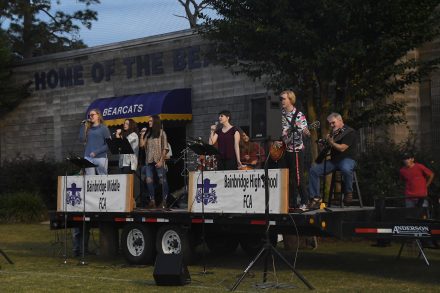 Members of the Bainbridge High School Fellowship of Christian Athletes lead the huge crowd of attendees in praise at Centennial Field.

A large crowd gathered at Centennial Field Wednesday night, for the first Fields of Faith meeting since the pandemic began. Attendees sang and participated in prayer groups, as well as one massive prayer circle at the event’s close. The guest speaker for the evening was Ray Drew, a former UGA football player, who is currently residing in Thomasville.

Drew spoke on his personal spiritual journey, and how he came to his current understanding of Christianity.

“By a show of hands, how many people, being at an event like this, you’ve heard it said before that God is a God of grace and mercy?” he asked. “Mercy is God withholding something from us that we do deserve… Grace is getting something that you don’t deserve.”

Drew spoke with the Post Searchlight after the service had concluded.

“I got involved with this through FCA of South Georgia, with Mr. Noah… I was actually supposed to be doing one in Colquitt County right when everything was setting in, and it ended up getting canceled due to COVID. So this was the first Fields of Faith that I’ve had an invitation to do since things have opened back up.”

He described his decision to speak as “a Kingdom yes”. “Any time, if I have it in my schedule, my whole sediment is ‘yes’ to the Kingdom,” he said. “If it’s to build the Kingdom, to grow the People of God, and encourage somebody along the way, I’m all for it.”

“We actually met through FCA events when he came back to town a few years ago,” Henson said. “He had spoken at a couple of FCA events around town. He’s kind of a local legend in Thomasville, and me, coaching and teaching in the area, I kind of knew the name from high school and college football.” He continued, saying, “But then I got to meet him a few years ago when we started doing ministry together… As soon as I heard that Fields of Faith was going to be an opportunity to happen again this year, he was one of the first ones I had on my mind.”

Scott Miller, director of BHS athletics, spoke on getting Fields of Faith started up again.

“This is our eighth year doing this,” he said. “We haven’t had it in a couple of years, because of the hurricane and the pandemic, so we’re just kind of jump starting, getting it going again. We’ve had it growing seven years in a row, growing and growing, and I think it was the hurricane that set us back.”

According to Miller, the turnout for the evening was incredible, given that Fields of Faith hadn’t met in years.