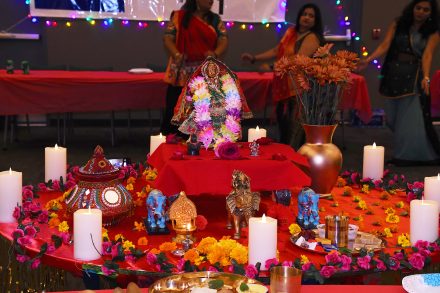 Local Hindus dance and sing around an altar to the goddess Durga, who symbolizes protection and motherhood.

Local Hindus young and old gathered at the Kirbo Center Saturday night, to celebrate one of Hinduism’s major seasonal festivals, Navratri. The festival is held during autumn, lasting nine days, with each day in honor of a different aspect of the divine feminine, with Saturday’s festival honoring the goddess Durga.

This is the first time the Hindu community held a Navratri festival here, with the event being organized by locals Hashwin Patel and Anand Patel, who wanted to provide festivals closer to home.

“Before it was hosted in Dothan, Albany and Macon,” Hashwin explained, “But, we all have people with stores, so we closed at 10:00, and would go drive and then come back late at night. That’s why we have decided we won’t go outside, we’ll keep it here, so it’s easy for us to close the stores early, and no driving late at night.”

He described the event as a success, with 140 people attending, with only a few failing to attend due to illness.

The festivities began at 7:00, with the Durga Aarti, a song of prayer, followed by breakfast. More song and dancing followed in the evening, first the Garba, followed by a special dance. Other ways of worship and celebration include fasting and recital of scriptures and stories.

“These festivals, we pray to the gods, and tell them to keep everybody’s health good, fitness good, mental is good, body and strength, income… everything good, we pray for. That’s why we celebrate these festivals.”

Hashwin plans to hold more religious festivities locally in the future as well, such as the Diwali Festival next month, on November 4. Diwali traditionally lasts five days, with the first day, Vagh Baras, dedicated to the worship of cows; the second day, Dhanteras, is for honoring Lakshmi, goddess of wealth and good fortune; the third day, Kali Chaudash, is in honor of the gods Kali and Krishna slaying the demon Narakasura; the fourth day, Diwali, honors Lakshmi and prays for financial prosperity; and the fifth day is a new year’s celebration.

“Navratri is an ideal time to connect with the spiritual self,” Hashwin said. “During these spiritual nine days you connect with yourself and learn to calm your senses, body, mind, as well as the soul.”