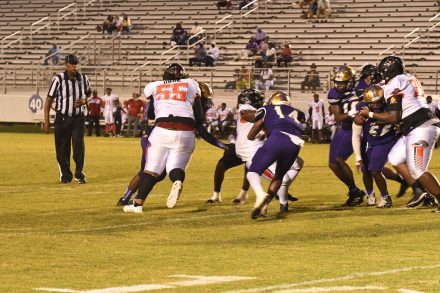 The Bainbridge Bearcats continued with their winning streak on Friday night, when they hosted Dade Christian out of Miami, ultimately beating them 35-12 in a hard-fought game.

The Dade Christian Crusaders’ defense started off strong in the first quarter, allowing the Bearcats to score only one touchdown.

With 22 seconds left in the quarter, Travious Freeman made a 2-yard run, following a drive of 46-yards over six plays.

The Bearcats continued to gain momentum headed into the second quarter.

Quarterback Bo Smith made a 1-yard run with 7:21 left in the second quarter, following a 2-yard drive over three plays.

Nick Tyre made the kick, putting the Bearcats ahead 14-0.

Just minutes later, Zion Bouie had a 58-yard punt return with 5:50 left in the half. Fagan made the kick.

Dade Christian finally found the end zone with 4:38 left in the quarter.

Steven Fowles caught a 95-yard pass from Messiah Leite. Jayden Harris attempted the extra point, but it was no good.

Coming out of halftime, the Crusaders attempted to make a comeback.

Early in the 3rd quarter, Rayquan Adkins had a 45-yard interception return with 7:48 left in the quarter.

The Crusaders opted to go for the two-point conversion. However, Marquis Wright’s pass was incomplete.

With the score 21-12, the Bearcats made another touchdown late in the third quarter.

The final play of the night came with 9:27 left in the fourth quarter.

“It was a hard fought win,” Head Coach Jeff Littleton said. “We have a few mental things we have to work on, but our kids played hard.”

Littleton said the win was attributed to a good week of practice and the mental focus will come in due time.

The practice paid off with Freeman having 14 carries for 59 yards, Zion Bouie having 9 carries for 48 yards and Keenan Phillips having 12 carries for 36 yards.

Smith completed six passes for a total of 118 yards, while Deyon Bouie had two receptions for 53 yards, Murphy had 1 for 38 yards, Zye Chrispen had 1 for 13 yards and William Goodson had 1 for 12 yards.

The Bearcats will now host the Westover Patriots in a region game next week at home for their pink out game at 7:30 p.m.

Local XC teams have big showing at TCMS and…