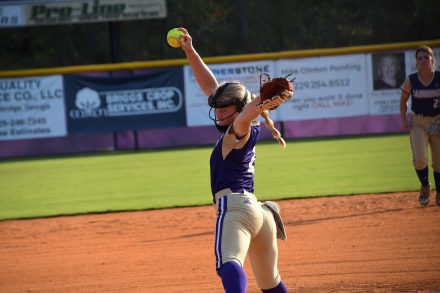 On Wednesday, Haylee Nix started things off for the Lady Cats in the first inning, singling. Kylie Miller then hit a line drive, reaching on an error by Thomasville and scoring Nix.

Headed into the bottom of the second inning, the Lady Cats drove in five more runs, taking an early lead.

Senior Delaney Purvis singled, before Kristin Bennett stepped up to the plate, singling and reaching on an error.

Wenda Sheffield then singled on a bunt before Nix stepped back up to the plate and singled on a line drive, scoring Purvis.

Pitcher Brenna Conley was up to bat next, hitting a fielder’s choice, scoring Bennett.

Thomasville made a comeback in the top of the third, batting in four runs.

Their big inning was driven by singles and a home run.

The offense toughened up and neither team scored in the fourth inning.

The Lady Cats drove in their final runs of the game in the bottom of the fifth inning.

Lenijah Henry was walked, along with Sheffield. Nix then singled, before Conley stepped up to bat.

Back up to the plate, Cannon doubled, scoring Nix. Miller followed up Cannon’s double with one of her own, scoring Cannon and Conley’s courtesy runner, Za’Riah Solomon, ending the inning 10-4.

Thomasville refused to stay down for long, responding with three runs of their own in the top of the sixth.

Neither team scored again, finishing out the night with a 10-7 game.

Conley won the game for the Lady Cats. She lasted seven innings, allowing eight hits and seven runs, while striking out 12.

The Lady Cats racked up multiple hits throughout the game with Cannon and Nix each collecting three hits to lead the Lady Cats at bat.

Head Coach Christopher Bryant was proud of the win, but even more proud of the seniors who have led the team over the years.

“This is a great senior class,” he said. “All five of them have been instrumental in the success of this program, and have helped lead these younger players to live up to the expectations of what it means to be a Lady Cat.”

Following a great team win, the Lady Cats traveled to Thomasville on Monday to face off against the Lady Bulldogs once more.

The offense on both teams started off strong with neither team scoring until the third inning.

Finally, in the top of the third, the Lady Cats brought in one run.

Conley then stepped up to the plate, singling and scoring Woodard.

The Lady Cats scored an additional run in the fourth inning.

Kailyn Wilson hit a fly ball, but was able to reach on an error by Thomasville. Woodard then doubled, scoring Wilson, giving the Lady Cats a 2-0 lead.

The team was able to drive in a lone run again in the fifth inning.

The Lady Cats scored their final runs of the game in the top of the sixth inning.

Although down by five runs, Thomasville made a comeback in the bottom of the sixth, driving in three runs.

Headed into the seventh inning, Thomasville made one last-ditch effort scoring one additional run in the bottom of the seventh, ending the game 4-5.

Conley was attributed with the win, lasting five and two-thirds inning, allowing zero runs on one hit and striking out eight.

Bryant said the game was an exciting and fun one for the team.

“A few timely hits couple with some excellent pitching and defense allowed us to capture the W,” he said.