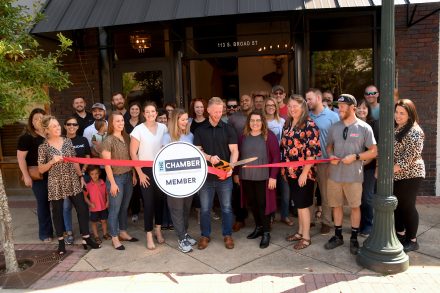 Hunter Bulger cuts the ribbon on his new downtown office for the Remnant Group, while surrounded by family, friends and members of the Chamber of Commerce on Friday afternoon.

Members of the Bainbridge Chamber of Commerce gathered at 113 S Broad St this past Friday for the ribbon cutting for The Remnant Group, an extension of Keller Williams Town and Country Realty.

After months of construction, Hunter Bulger’s dream has been realized.

“This is my home town. After moving away to Tallahassee for two years, I just wanted to bring that experience back to Bainbridge,” he told the Post-Searchlight in a March interview. Now with the ribbon cut, Bulger is optimistic about the future.

“It feels awesome,” he said. “It’s been a dream of mine to contribute toward revitalizing downtown Bainbridge, and I get to do that, as well as start my own business, so I’m pretty excited.”

“It’s so exciting to finally be stamped down here in downtown Bainbridge, and be involved with the community… it’s been so great.” She also commented on the building’s remodeling, saying, “The intricacies of how Morgan and Hunter designed this building has been so great, to want to resemble what the building was originally set for, and also bring a new aspect of modern day to it.”

“It’s been a long time coming,” buyer’s agent Alicia Arevalo said, “It’s cool to see from where we started, with this building completely gutted, to now have a place to call home.” She gave a statement on the Remnant Group’s goals, stating that, “With the Remnant Group, we just want to serve people. We want to take care of them and we want to let them know that they’re first, and finding the home they’re going to be in is important to us.”

Sales agent Rachael Ward looked forward to finally having a designated place to meet and work, no longer having to meet at The Bean.

“It feels like, as a team, we’ve already been having meetings and get-togethers, but they’ve been sporadic, so I feel like, with the ribbon cutting, as a team, we’re going to come closer together, so I’m excited about that,” she said happily.

Jason Bell, who works the Thomasville area, said, “I love to see what God has done. Getting me connected with Hunter, putting this whole building together, connecting our team, it’s been really cool to see.”

“I’m just very thankful for the support this community has shown me so far,” Bulger said. “I look forward to serving everybody well.”

On September 26, the Miss Decatur County Pageant was held at the Kirbo Center, where contestants used the pageant as... read more