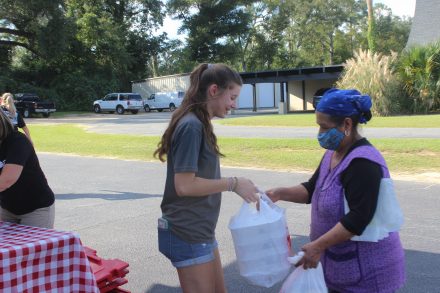 Salvation Army volunteers serve meals to those in need as part of a new meal program.

According to Salvation Army director Merreann McDonald, these community meals are intended to be held once a month, on the last Monday of each month.

“It is a two-fold event,” she explained. “It is to take care of our community by meeting a need, by feeding people that either are hungry, don’t have enough money to make it to the first of the month, that’s why we chose the last Monday of the month… and also, with Covid, there’s many people who can’t get out, go to the grocery store. So it’s not just for the person who’s in financial need, it’s for the person who’s in any type of need.”

The second reason for these events is to serve as training for volunteers with the Army’s food truck.

“We are the Salvation Army, and we are disaster responders. So in order to build a disaster team that could respond to either a local disaster, or say a disaster in Louisiana, we need people who are familiar with the equipment and know how to use it.”

The food truck is fully equipped with a gas stove, gas oven, microwave, coffee pot, griddle, and storage for both cold and hot beverages.

“The unit itself, there’s a lot of working parts,” McDonald said. “So, the second purpose of this is to train everybody to be able to use the equipment, so, should a need arise, we’re not screaming at each other trying to learn how to use the equipment.”

She elaborated that her team of volunteers shouldn’t be dependent on her in future crises.

“I’m trying to get people to do this so, if I were out of the picture, everybody knows what to do, so it’s not dependent on one person’s ability or knowledge,” she said.

“The Salvation Army of Bainbridge wants to thank every volunteer who gave their time, talents, and gifts to make this possible,” McDonald wrote on Facebook.