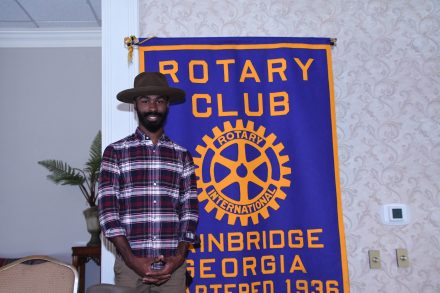 The Bainbridge Rotary met on Tuesday for their regularly scheduled meeting. The guest speaker for the day was Eldrick Jacobs, owner of the Flint & Port Hat Company.

“I was always fascinated by early American history, particularly Colonial, Revolutionary history, even the discovery of America,” Jacobs explained.

This interest in history led him to the history of beaver fur, once heavily sought by trappers in Colonial America for use in hats and clothing.

It is beaver felt that Jacobs uses in his hats.

“I was really inspired when I was thinking about, ‘How do we build a hat company that brings the sights, the sounds of the things I grew up around to a product that’s useable… that minimized waste, that we use the highest quality products… I was really interested in how do we be more ecologically friendly and conserve the natural resources that God has given us.”

They use not only beaver felt, but also rabbit felt.

Jacobs showed those in attendance videos of his hat making process, courtesy of a Style Insider interview he gave. All of his hats are made with old techniques, and by hand; according to Jacobs, it takes between 15 and 20 hours per hat. He learned to sew at a young age, and had intended on becoming a fashion director, before his mother persuaded him otherwise.

Several years after graduating college, Jacobs found himself moving to Cleveland, Ohio, where he bought a hat.

“The research side of me discovered that I had paid $400 for what amounted to about $10 worth of wool,” Jacobs recounted. “In as much as it was a blunder of a purchase in some ways, it actually was sort of serendipitous that it allowed me to go down that rabbit hole.”

Golf to End ALZ a success