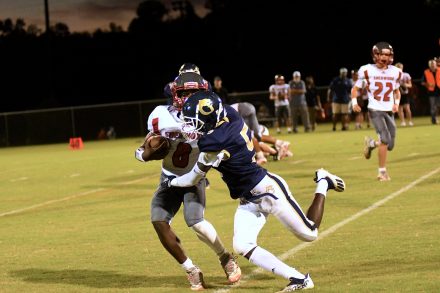 Highlights of the evening’s offense included junior Jayfus Ferguson, who rushed for a total of 242 yards and scored five touchdowns. On defense, Ferguson made eight tackles.

Senior Carter Hathcoat passed for 86 yards and scored a touchdown.

Junior Kevin Brooks had 77 yards receiving and scored a touchdown.

Junior Corrin McKay rushed for 74 yards and made a touchdown.

Junior John Cruz rushed for 68 yards and made a touchdown.

“Our defense has been playing great,” Coach Lance Godwin said in an interview. “So, we took all our time now on offensive line, blocking, really finding their man, filling the right gaps and getting outside the pulling guards. And it showed tonight, we had a lot of break-away runs.”

According to Godwin, the Cougars’ hardest challenge will be in the next five games. The Cougars are set to face off against Covington in an away region game this weekend. Kickoff is at 7:30 PM.