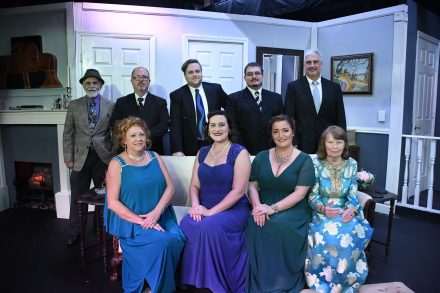 The “rumors” are true; Henry Intili is back at the Bainbridge Little Theatre directing a comedy to open up the BLT’s 2021-22 season.

According to Intili, the comedy is set in 1980’s New York State, just north of New York City. It premises around four couples attending a 10th anniversary party, but the catch is no one in the audience ever sees the couple throwing the party.

The supposed host’s husband had been shot through the earlobe and she was nowhere to be found.

“As people come in for the party, others are trying to cover it up and invent a story about who is where and why they’re there,” Intili said. “Nothing makes sense, until they find out in the end he’s been shot.”

The couples don’t find out about the shooting until the police arrive on scene and that is when all mayhem breaks loose with every couple telling their own fictitious version of the truth.

“The couples think they know what happened, but they don’t get along and are always mixing things up,” Intili said.

These mixed up relationships and crazy happenings are what led Intili to this production, as he loves a good slapstick comedy.

“I love when the one door slams and another opens, but you never know what’s happening behind there,” he said. “That kind of fast back and forth, I find very funny.”

The back and forth and hilarity of it all wouldn’t be possible without a good cast.

This production includes a lot of familiar faces, along with g a blast from the past.

Wimberley said she is so excited to be able to return to the stage and be under the lights for the first time since COVID-19 and invites everyone to come out and enjoy their production.

The show will last through October 3 with Thursday- Saturday’s performance at 7:30 p.m. and a Sunday matinee at 2:30 p.m. Visit www.bainbridgelittletheatre.com for tickets.