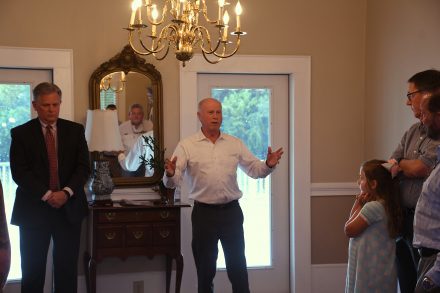 Influential members of the local community gathered at the Chamber of Commerce on Wednesday afternoon for a meet & greet hosted by Senator Dean Burke; specifically, they came to meet with Butch Miller, current president pro tempore of the state Senate and a candidate for Lt. Governor in next year’s election.

Aside from owning and managing the Milton Martin Honda dealership, Miller became a state Senator in 2010, and would go on to become chair of the State and Local Government Operations committee in 2011. He has served in various other roles since, including chairman of the Majority Caucus, and became president pro tempore in 2018.

Miller recounted how he met Senator Burke, his entry into the auto business and his negotiations and exploits in politics.

“I do the work I have to do to get the job done,” he said. “I try to be very non-partisan. As the pro tempore, I have to be, that’s my job, to lead the entire Senate, not just the Republicans. But if we let the Left do what they want to do, we’re going to have increased taxes, increased regulation, decreased productivity… The number one item I’ve heard all over the state… is ‘How do we get people back to work?’”

“I feel very strongly about healthcare, access to healthcare and affordability of healthcare,” he said. “I also feel very strongly about education, access to education, and affordability of education, making sure that we’re training our young people and re-training our middle-aged people for the jobs of today and the jobs of tomorrow.” He continued, “We’ve got to continue to invest in transportation, because if we don’t invest in transportation, Georgia will choke on our own progress… We’ve got to have infrastructure, and that would include roads, bridges, highways, rural broadband, water, sewer, etc.”

“I’m not big on political promises, because usually, politicians don’t keep them, and people don’t listen to them. But, I’ll make you two promises: Number one, I’ll do my best to never disappoint you, and number two, nobody will work harder than I will,” Miller concluded.