GCA Volleyball sets up a win against SCA 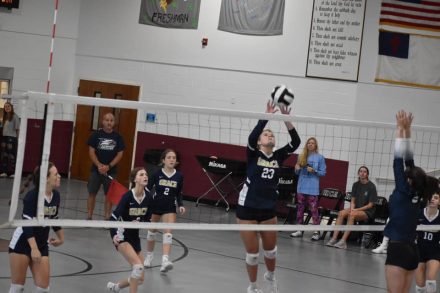 Ella Harrell tips the ball over the net during the Brunswick Invitational over the weekend.

The GCA Varsity Volleyball team was rather busy last week, traveling to Albany last Tuesday to play against Sherwood, before leaving for Brunswick Thursday for an invitational tournament hosted by Heritage Christian Academy, which saw them face off against Heritage, as well as Bethlehem Christian Academy and Frederica Academy.

“This was a good win for us,” Coach Mardi McRae said, “because they’re AA, they’re a lot bigger than we are, and we’re playing up this year. We should be in single-A, but to not have to travel over to Savannah, we’re playing in AA with the bigger schools.”

At the Brunswick invitational, the girls played both Friday and Saturday. They lost to Bethlehem on Friday, winning their first set 25-22, before losing the remaining two. They won over Heritage, scoring 25-12 in the first set, losing 18-25 in the second, before securing a 15-10 win in the third. They lost their first set against Frederica, 23-25, before coming back with two more wins, 25-22 and 15-5.

Those wins allowed the girls to progress to the Saturday bracket, where the girls beat Heritage again, 25-23 and 25-20. Unfortunately, they lost against Bethlehem in the semis.

“They started out slow,” McRae said. “They let a lot of balls drop that they should’ve gotten, very uncharacteristic of them. But then by that third game, they were getting back in it.”

She praised some of the girls for keeping them going, “Mallori Jordan held us in there on Friday… then Ella Harrell and Mary Glenn Warr, also, are just good to bring the team back together.”

The girls are set to play Sherwood again at home this Thursday afternoon.