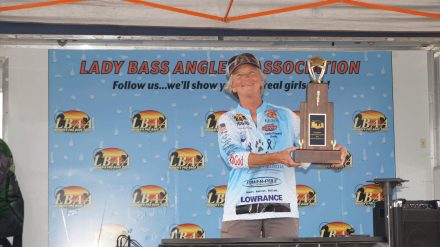 It took several months to get there, with the first qualifier tournament set on Lake Ray Hubbard in Garland, TX, back in March. The qualifiers then progressed to Hickory Lake in Hickory, N.C., in May, before concluding in June on Cane River Lake, in Natchitoches, La. Martin-Wells won at both Ray Hubbard and Cane River, and took third place at Lake Hickory. These gave her enough points to win Angler of the year, and allowed her to progress to the championship, which was held on Lake Logan Martin, Lincoln, Ala.

“It was actually a tough tournament,” she said. “Training days were sunny and hot, and the tournament days were rainy.”

The tournament lasted from Thursday to Saturday, with Martin-Wells changing tactic each day.

“I went way down south to fish on the first day… then I did the opposite on the second day, and went upriver. I did both on the third day… I don’t want to say it was miserable, but it was a soggy day,” she said.

This isn’t the first time Martin-Wells won Angler of the Year, having won it eleven times previously.

“It’s based on points through the season, so you have to be consistent throughout the year, so it’s still special to win it,” she said.

Martin-Wells has been professionally fishing for roughly 35 years.

“It’s been a job,” she said. “But, it’s a passion that I enjoy. I’ve been fishing since I was a little bitty thing. The drive to compete, it doesn’t matter how old you are.” She continued, saying, “We go all over, it’s a constant challenge. Lakes change, fish change.”

She concluded by expressing her thanks to those who have helped her: “I definitely couldn’t do what I do without a good support group: the good Lord, my husband, my friends and family, and not least of all my sponsors.”

“I really appreciate my hometown for all their support,” she said in regards to the city’s sponsorship. “It really is a great feeling knowing you have your hometown behind you.”