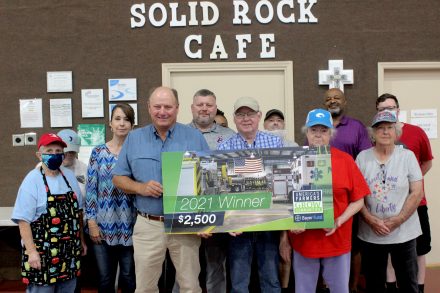 Andy Bell stands with members of the Bainbridge Church of God Soup Kitchen, presenting them their funds.

Thursday afternoon saw the Bainbridge Church of God soup kitchen was awarded a $2,500 grant from the Bayer Fund’s “America’s Farmers Grow Communities” program, having been directed to them by local farmer Andy Bell.

“You sign up, and then you sign up for the charity that you want to have the money,” Bell explained. “It’s a random drawing. I’ve filled it out ten times, this is the first time I’ve ever received it.” He elaborated further, saying, “It used to be Monsanto, but Monsanto sold to Bayer. Monsanto had a program, they’ve got several different programs, where in each county that grows cotton, corn or whatever, we use a lot of their products. BT corn, BT cotton, technology fees, we use a lot of their products. So they give back to the community, and each county that a certain amount of their product is used.”

Bell was made aware of the soup kitchen by Sherry Weaver, who explained the limitations of which charities are eligible for these grant donations.

“It has to be a 501 (c)(3). Normally it is not a church, but if the church has a situation like this where they have a soup kitchen, then that’s how it could be awarded. Because I had to answer a ton of questions to get this to awarded to the soup kitchen, because it is under the umbrella with a church.”

According to Wade Lang, member of the Church of God council and director of the soup kitchen, the kitchen usually serves between 280 and 300 meals every Thursday, in addition to delivering between 150 and 160 to homebound residents.

“I know I’m blessed. But everybody’s not,” Bell said. “I appreciate what the soup kitchen does, and everything they do for the community. It’s a needed service, and I’m glad to be able to help.”