Wearing Down the Wildcats 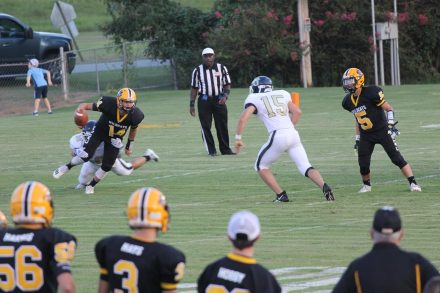 Kooper Kearns tries to take down a Wildcat, as Landon Temples (15) runs over to assist him.

Grace Christian Academy continued their successful football season Friday, September 3, as the Cougars headed north to Cordele to secure a victory over Crisp Academy that evening, 48-28.

Highlights of the night’s game were Junior Jayfus Ferguson, who rushed for a total of 101 yards and passed 116 yards, throwing for a touchdown; on defense, Ferguson made five tackles.

“We’ve been working hard on getting the ball back for offense,” Coach Lance Godwin told the Post-Searchlight. “I was a little nervous going into this, because this team beat us pretty badly last year. I was worried how the boys would react, but we did what we needed to do to win the game.”

According to Godwin, the team intends to work on their passing as they practice for this weekend’s game.