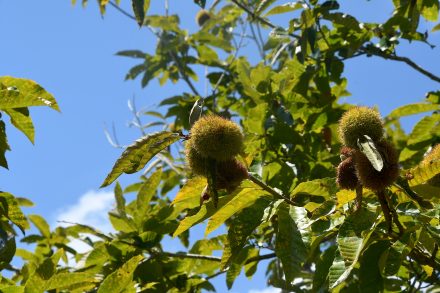 Chestnuts branch out on the trees at Adams’ chestnut orchard.

When a person thinks of the crops and produce Georgia is known for, one thinks of corn, peanuts, cotton and peaches, probably pecans as well. Most probably wouldn’t think of chestnuts. Once a prominent tree in the Eastern US, the American chestnut was used for food, and its lumber for homes, telephone poles and railroad ties. Unfortunately, the American chestnut population was decimated by a blight in the early 1900s.

Now, efforts to restore the chestnut are currently underway. And at 424 Batten Road, people can get a taste of this scarce nut at U-Pick Chestnuts. This orchard was started by Jerry Adams in 1996, though it wasn’t until 2016 that it began to produce a sizeable crop.

“It takes about 20 years, really,” Adams said. “It was a catastrophe when the American chestnut tree got killed,” he lamented, “Because, it was wonderful. They called it the Sequoia of the East.”

Initially, Adams sold the nuts over the internet, and has attempted to sell them in stores. Now, he has changed to his “you pick ‘em” model, where customers come and pick up however many nuts they wish.

“You can pick up about 45 or 50 pounds in about an hour and ten minutes,” Adams said.