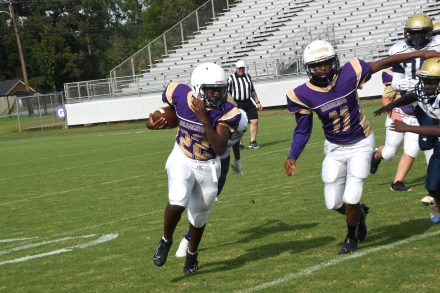 Alejaendro Thomas breaks free and runs it for a touchdown, while number 11 protects him from the Yellow Jackets.

In the 7th grade game, Thomas County took an 8-0 first half lead, with 3:12 left in the first quarter, as the Yellow Jackets scored from one yard out and followed a two point pass conversion, which proved to be the only scoring of the first half.

In the second half, Thomas County scored their second touchdown with 2 minutes remaining in the third on a 5- yard run. On the 2pt conversion, Bearcat Safety Jeveen Breedlove came up and tackled the back short of the goal, making the score 14-0.

With 1:27 remaining in the third the Bearcats struck paydirt as running back Alejaendro Thomas went up the middle and broke free for a 61- yard touchdown. Breedlove ran in the two point conversion to close the Yellow Jacket lead at 14-8.

In the fourth Quarter Thomas County added a final score with 5:53 left on a three yard run to give the visitors a 20-8 lead. Bearcat Outside linebacker Damian Price tripped up the back to thwart the Yellow Jackets two point conversion attempt.

With 3:36 left a Yellow Jacket defensive back stepped in front of a Bainbridge pass intercepting it and raced 45 yards for the score. The run for the two point conversion failed and Thomas County had a 13-0 lead.

On Bainbridge’s 2nd play following the ensuing kickoff Thomas County intercepted another pass and returned it to the Bearcat six yard line.

On the next play Thomas County scored on a run and then converted the point after kick for the final scoring in the game, with 1:27 remaining in the third, making the score 20-0
Both defenses rose up in the fourth period that maintained the final score.

Wearing Down the Wildcats