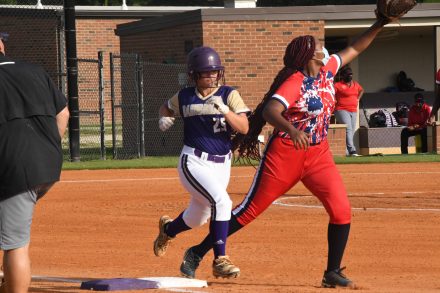 Haylee Nix runs into first base, just as a Westover Lady Patriot is being thrown the ball.

The Lady Cats Softball team is now 9-0, as they continued their winning streak on Monday night at home defeating Westover 19-2.

The Lady Cats originally faced off against region opponent, Dougherty on Thursday night, winning 12-0, before playing their make-up game on Monday.

During Thursday’s game, Brenna Conley threw a no-hitter to lead the team to victory.

Delaney Purvis got things moving in the first inning, when she singled on a 1-1 county, scoring one run.

Kylie Miller then smacked a home run, advancing the lead to 4-0 in the first inning.

The second inning got started with Haylee Nix singling, before Conley bunted, reaching on an error by the third baseman.

Purvis sacrificed, allowing for one more run. The Lady Cats led 8-0 in the bottom of the second.

They scored an additional 4 runs in the bottom of the third inning, ending the game.

Conley lasted four innings, allowing zero hits and zero runs, while striking out 10 and walking one.

Cannon led the Lady Cats in hits, going 2-for-3 at the plate.

Monday afternoon, the Lady Cats were on fire against Westover.

The team drove in 12 runs in the first inning.

Conley got things moving when she singled, scoring Nix.

Purvis then singled on a bunt, before Kailyn Wilson singled, scoring Conley.

Lenijah Henry then stepped up to the batter’s box, where she reached on a dropped third strike, allowing Miller to score on a passed ball.

Destiny Woodard singled, along with Kristin Bennett. Nix was then walked, scoring Henry.

Conley was up at the plate next, singling and scoring Bennett and Woodard’s courtesy runner, Za’Riah Solomon.

The Lady Cats got one additional run, before Westover took to swinging, scoring two runs.

The Lady Cats ended the game in the bottom of the second inning, when they brought in seven runs.

Bryant said the team is looking forward to this challenge, as they haven’t been able to play a full seven innings yet; the longest game has lasted four innings.

“The girls are hungry for that challenge,” he said. “This game is going to be a true test.”

The Lady Cats will play Cairo at home in a doubleheader on Thursday at 4 p.m.