Bulldogs bite back against Bearcats 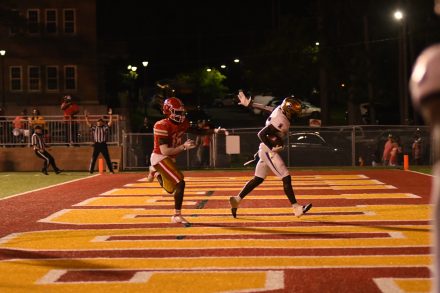 Zay Chrispen has celebrates the Bearcats lone touchdown during the second quarter.

The first quarter started off slow with neither team making a touchdown.

However, a bright spot came for the Bearcats with 4:34 left in the quarter when Nicholas Tyre made a 32-yard field goal, giving the Bearcats a 3-0 lead.

The Bulldogs came out strong in the second quarter, though, scoring two touchdowns.

Bulldog Ricky Fulton made 24-yard run with 10:01 left in the second quarter, giving the Bulldogs the first touchdown of the night. Daniel Belvin then made the kick and it was good, making the score 7-3.

Minutes later, Bulldog Malik Harper made a 2-yard run with 4:26 left in the half. Belvin made the kick again and it was good, giving the Bulldogs a 14-3 lead.

Refusing to go into the locker room without a touchdown on the board, Zacchaeus Chrispen caught a 15-yard pass from Quarterback Bo Smith with only .29 seconds left in the half. Tyre then made the kick, and it was good.

Coming out of halftime, the Bulldogs’ defense was strong, not allowing the Bearcats to score again.

Harper made a 1-yard run with 5:05 left in the third quarter with Belvin making the kick. The Bearcats then lagged 10-21, needing a touchdown and another field goal.

It all came down to the fourth quarter, where the Bulldogs’ defense just held out.

Harper had one last 2-yard run with 8:33 left in the game. Belvin made the kick and it was good, ending the game.

Following the loss, Head Coach Jeff Littleton said the team had to go back to work.

“We got outplayed and had a lot of penalties,” he said. “That’s what happens when you don’t play games, you don’t get any consistency.”

Littleton went on to say that he hopes to see more discipline on both sides of the ball in the future.

“We got outplayed on offense, defense and special teams tonight,” Littleton said. “The sign of a good team though, is to fix things and trust the process.”

Littleton reminded the team that they have been in this position before and that if they can fix the mistakes made during Friday night’s game, everything will be just fine.

“We do have some positive things; we just need to be more consistent,” he finished.

The Bearcats will now take on Ware County at home next Friday night at 7:30 p.m.