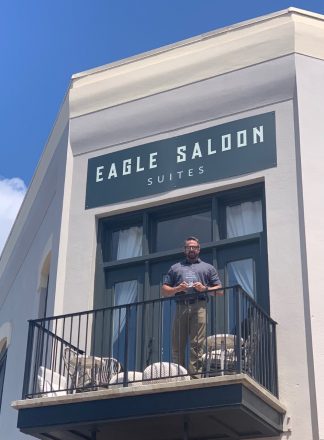 Nominated by Downtown Bainbridge, this project does an excellent job of referencing the history of this unique corner building to create a modern hub in downtown Bainbridge. The exceptional care taken in preserving historical elements and details and in going above-and-beyond to restore elements lost over the decades make his a project worthy of recognition. By bringing downtown lodging, ground floor retail, and more to a formerly vacant building, the outsized economic impact of this project makes this a particularly transformational restoration.

The existing building was built circa 1899 due to a devastating fire between 1898 and 1900. According to the 1900 Sanborn Fire Insurance Map, the Eagle Saloon occupied the newly built two-story brick building at the corner of Water Street and Broad Street in Downtown Bainbridge. The original structure had restrained Victorian detailing such as an arched window, a brick corbelled cornice, a wooden and glass storefront, and cast iron columns. Over time previous owners applied stucco to the original brick façade, applied aluminum veneer to the commercial storefront which hid the cast iron columns, and boarded upper story windows.

Once the metal veneer and the dilapidated awning were removed, Doug Young of PDC Construction carefully studied and compared historic photos to the current condition of the façade. He was excited to discover two cast iron columns were still intact that had been encased with scored stucco, which resembled concrete blocks. The original entryway, which led to the second floor, was bricked in. The Youngs retained architectural details from the interior such as refinishing the original heart pine floors, differentiated new additions and exterior alterations from the old to be compatible with the massing, size, and scale to protect the historic integrity of the property. The historic storefront configuration was replicated by studying historic photos, during the Eagle Saloon era, in regards to angles, depth, and recess portions. Since the upper door opening existed, on the second floor, Doug reconstructed the historic balcony by examining historic photographs. The rehabilitation at 201 N Broad Street added two new residential units, and provided an updated commercial space for J. Christine Esthetique to relocate her business. The relocation of the business created three additional jobs, and the total investment by the Young’s was $300,000. The developer claimed over $81,000 in Investment & Rehabilitation Tax Credits through the R.U.R.A.L. Zone legislation, and the business owner claimed $6000 in Job Tax Credits for five years.