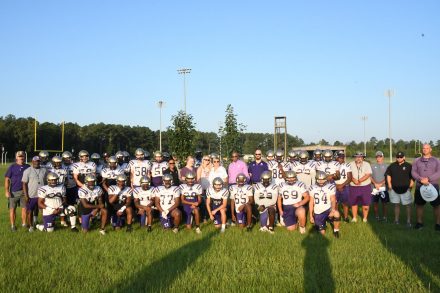 The Bearcat football teams stands with the Mathews family and the two Bradford Pear trees in Dr. Mathews’ memory.

Friday morning the late Bainbridge High School Principal Dr. Roy Mathews was remembered in a touching way by the administrative staff of Bainbridge Middle School and the former Hutto Middle School, when they planted trees in his honor at the Bearcat practice field.

BMS Principal Quinten Fuller said he had spoken to several colleagues thinking of ways to honor Mathews’ memory. While discussing ideas, they spoke of Mathews’ favorite colors, which were purple and gold, along with garnet and gold.

That’s when Fuller and his staff had the idea to purchase a Bradford Pear tree, which provides shade in the summer time, but will turn the garnet and gold hue Mathews loved in the fall.

Dr. Crycynthia Gardner of HMS wanted to buy one for their school, alongside Fuller because of Mathews’ illustrious history with the school.

The principals then decided there would be no better place to plant these pear trees then the Bearcat practice field.

“We wanted to do this in honor of his memory,” Gardner said. “We planted them here because of his dedication to his students. He truly had a heart for his kids, his family and his Bearcat family and did all he could to make everything excellent.”

Mathews’ wife, Brittney and daughter Ramsey and Carlee were in attendance of the planting of the trees, along with the Bearcat football team and family friend Christopher Bryant.

Brittney was touched by the thought and gesture from the staff of the schools.

“He loved all sports, but football was a little special to him because he played at Coffee County,” Brittney said. “He wanted everyone to excel in every sport, but with them doing this (planting) right here on the practice field he would be ecstatic.”

Brittney said her and the girls plan to visit the tree often and feels it is an honor for them to have planted it on the practice field, because she would often call her husband after he got off work only to find him talking to Head Coach Jeff Littleton and watching the boys practice.