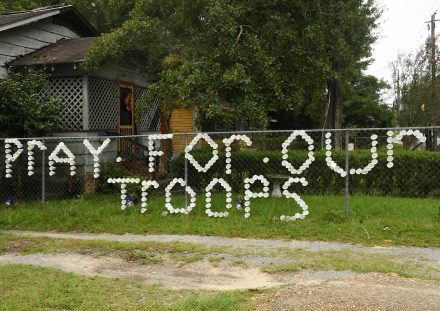 Shelita Close adorned her fence with cups, inviting passers by to pray for our troops.

Those driving down North Sims Street lately may have noticed a sign made in a fence as they drove by, simply saying “Pray for our troops.” Spelled out in cups arranged in the fence, it’s a message from one military mother to the community. Shelita Close, a teacher at Bainbridge High School and Army veteran, is also mother of Air Force First Lt. Darryl Thompson.

Mrs. Close had originally spelled out “Welcome home Lt.” in honor of her son visiting home last month. After his return to duty in Europe, she chose to change the sign in light of the current Afghanistan situation.

She intends to leave the sign up for at a least two more weeks; the first cup sign she ever put in her fence was a “Go vote!” sign last year.

“I believe in my heart that we should focus on God and helping others, because that is what we were put here on Earth to do,” Mrs. Close stated. “I have been fighting my own battle with breast cancer since August of last year, but what I have found is that when I give my all to God, my husband & sons, and my students everything else just falls into place.”