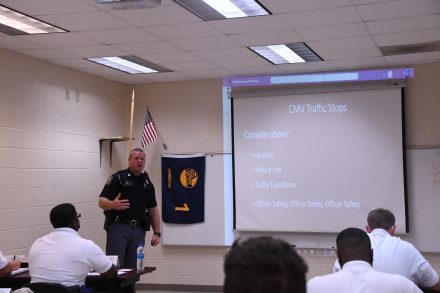 Those passing the old John Johnson Elementary may have recently noticed cars in the parking lot, along with signage work. The school has been repurposed as a satellite police academy, serving the surrounding counties.

Major Jared York of the Georgia Public Safety Training Center is heading up the academy.
York said the GPSTC in Tifton has always known the Southwest corner of Georgia was an under-served area with plenty of individuals who may feel the calling to go into the academy, but didn’t want to leave their families for 11 weeks and travel to Tifton.

The problem only grew when ABAC got rid of their dorms and drastically increased the costs local departments would have to pay to send cadets to basic training.

They soon agreed to house a satellite campus at the old JJE, which would save both departments a lot of money.

York said the basic training class began with 15 cadets, which has now dwindled down to 11.

However, he thinks a smaller number is best.

“We didn’t want to go crazy and get a huge number on our first go round,” he said. “The smaller teacher/student ratio works better for what we are trying to accomplish anyway.”

York said it has been difficult to get the word out to the surrounding counties about the full opportunities offered at the satellite campus, but he hopes after these 11 graduate they can have a full class in the new year, when it is offered again.

“We realize it takes time for the department to find people to send to the academy,” York said. “We also want people who are considering it to realize they can come to class and then go back to their house and have dinner with their families; they will not be confined to dorm as they would’ve been in Tifton.”

The academy has certified instructors from the Tifton campus, who York says have 10-15 years of experience working traffic, investigations and other calls of duty. However, they are also incorporating adjunct instructors as well.

“If we have an expert in a certain field, such as hostage negotiations or narcotics, we want to bring them in and have the students hear from people they know in their own community,” he said.

Cadets can expect to hear from those experts in the third phase of learning at the academy.

York explained when cadets first enter the academy they learn about Georgia Law before moving on to criminal procedure. During criminal procedure, the cadets learn what they can and can’t do when stopping individuals or searching property.

The class then individualizes topics, including family violence, domestics, burglary, robbery, crimes against children, etc., where they would hear from experts.

The final phase of the academy is very hands-on, according to York.

“We do a lot of roleplaying,” he said. “We will have instructors act as victims that the students then have to interview and proceed with.”

After all four phases are complete, the students will then graduate, where they are granted arresting powers. They then return to their agency and complete training with a field training officer.

York said he is very impressed with this first group so far and expects great things from then upon graduation.

“It is going very well,” he said. “They ask a lot of questions and are in excellent physical shape.”

York said the class includes a variety of men, ranging from recent high school graduates to prior military. He said there are currently no females enrolled at the satellite campus, but he has seen an uptick in female enrollment at the Tifton campus and hopes to see a female in their next class.

York finished by saying his eventual goal is to have two classes a year graduate from the satellite campus and to bring on-site training to the campus for current officers and deputies, so they no longer have to travel to Forsyth.

York is thankful for the support of Griffin, Green and his cohorts at GPSTC as he works to continue bringing police education and training to Southwest Georgia.