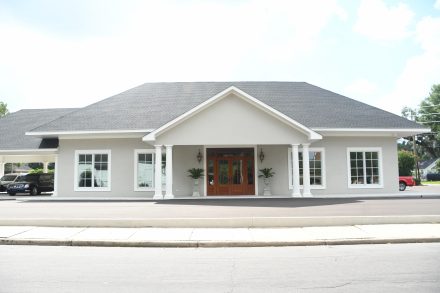 Bryant Funeral Home was a topic of debate at the City Council meeting, due to not receiving a conditional use permit.

Last Tuesday, the Bainbridge City Council held their regular meeting, where they heard a request from the Planning Commission to approve the conditional use of Bryant Funeral Home, despite a slip-up in the paperwork.

Planning Coordinator Steve O’Neil spoke to the City Council, following Mayor Edward Reynolds and Councilwoman Glennie Bench’s recusal, due to them owning the building Bryant Funeral Home is housed in.

O’Neil said the Planning Commission met the week prior, where they unanimously approved with conditions to approve Bryant Funeral Home for conditional use.

One of the conditions to be met was adequate parking, which Bryant addressed.

According to the City of Bainbridge’s ordinance there must be one parking space per every four people in the largest chapel space. Bryant Funeral Home currently offers 35 parking spaces, with 126 seats in their chapel space.

“With 126 seats, he is required to offer 32 spots, and currently has three extra,” O’Neil explained.

O’Neil said the Planning Commission also discussed overflow parking and public parking, none of which was completely necessary, according to him.

“They didn’t apply for a variance for overflow parking, because they already met all the necessary requirements,” he said.

O’Neil also explained that contractor Mike Conder made a verbal agreement with Southwest Georgia Oil to use their building’s parking as an overflow lot.

Upon explaining the conditions put on the permit, O’Neil issued an apology to the City Council.

“I know this conditional use permit has been a source of perceived controversy,” O’Neil said. “The process did not go as it ought to go and that is my fault.”

O’Neil explained that during the Planning Commissioning meeting, he became aware that the funeral home did not already have a conditional use permit attached to it, as he had assumed.

“I operated under that assumption for far too long before researching into the history, and once it became clear it did not have a conditional use permit, despite the fact construction was complete and had a certificate of occupancy issued, I had to make the choice to do nothing or go through the conditional use process,” O’Neil said. “My actions have further contributed to the ideals of the Backdoor Deals at City Hall and the Good Ole Boy System and for that I am very sorry.”

O’Neil acknowledged that his actions put both the City Council and the Planning Commission in an undesirable position, but promised them he had no calculated intentions. He simply believed because Bryant Funeral Home was previously a funeral home it had already been zoned for that.

“To that end, stop gaps have been put in place and this will not happen again,” O’Neil said. “However, had I seen this in regular circumstances I still would have approved it and do believe it is a good project.”

Councilman Phil Long accepted O’Neil’s apology and recommendation before opening the floor to public participation on the matter.

Joe Dent, a representative of Rollins Funeral Service, who owns Ivey Funeral Home was the first to address the Council.

“The opposing funeral home began operation in April of this year without a permit and without proper zoning,” Dent said. “They were even operating before a certificate of occupancy was issued.”

Dent said he appreciated O’Neil’s apology and realizes it is an unfortunate situation, but disagreed with the fact that parking was adequate.

“The photo shows 126 seats, but we have belief the capacity is upward of 180, so the proposed parking does not meet requirements,” he said. “It also does not meet offsite parking, which the zoning board requires.”

Dent said prior to arriving at the meeting, he did a drive by of the location and it had no spots currently painted, even the handicap spots were not the ones in the parking plan submitted.

“This begs the question if they will follow the parking plan submitted or not,” Dent argued. “We submit they can’t.”

Dent continued, saying the parking lot leased is currently a dirt lot and has no plans for parking either.

“Finally, I know the mistake has been addressed, but that does not create a vested rite to the owner,” Dent said. “I submit the application does not meet requirements for your consideration and for these reasons, I ask you deny the application.”

Owner Dana Bryant was surprised to hear this as a former employee of Ivey Funeral Home.

“We made the decision to go back to the zoning board and go back through the proper channels,” she said. “Ivey never reached out; we had no idea there was an issue.”

City Councilwoman Sylvia Washington asked O’Neil if it was possible to add seating to the chapel as Dent had pointed out.

O’Neil said it was, but after speaking with owner Max Bryant, he did not want to add any more chairs, because he needed more space for the casket and pall bearers.