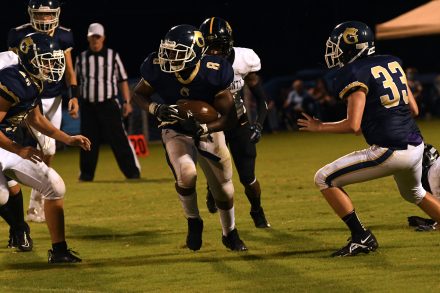 Jayfus Ferguson on the carry on Friday night. Ferguson had four touchdowns throughout the game.

The GCA Cougars gave it their all Friday night in their first game of the season, as they faced off against the Baker County Bears at home. The boys were able to consistently keep the Bears at bay, ultimately winning 48-6.

Kooper Kearns, the team’s senior halfback, rushed for 41 yards total, and had one touchdown. He also led the night’s defense, making eight tackles, four assisted tackles, and two fumble recoveries, one of which scored a touchdown.

Junior Kevin Brooks had 41 yards receiving total, and made three tackles, along with four assisted tackles.

“These boys have worked,” Coach Lance Godwin said, “We’ve got a lot of practice in, that, last year, we didn’t get.” He was excited about the night’s victory, saying, “I’m happy. I told the boys, the receivers, the quarterbacks and the running backs get the glory, but it’s won in the trenches, and our offense and defensive line played better than I ever expected.”

After the game, the Grace cheerleaders gave a bouquet of flowers to Baker County quarterback Trabian Parker, and the Cougar boys took time to thank and address him personally; Parker’s mother passed away earlier this week from COVID, and he had attended her wake that same day.

The Cougars will play against People’s Baptist in a region game this Friday at home; kickoff is at 7:30.