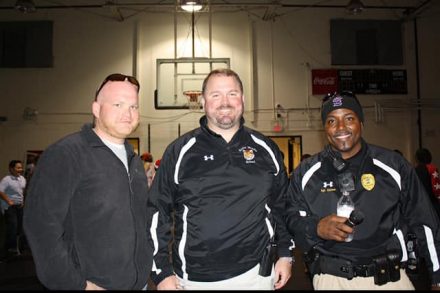 Pictured left to right is Christopher Bryant with Dr. Mathews and Maurice Gaines at the school.

Bainbridge High School Principal Dr. Roy Chapman Mathews passed away unexpectedly Wednesday afternoon from COVID-19 complications. Current and former students were brokenhearted to hear of Mathews’ passing. However, one thing they all agreed on was Mathews’ legacy, which will never be forgotten.

Former student Tessie Walker Hudmon recently shared her story of the impact Mathews had on her life.

Hudmon was a student at the PLC High School from 2004-2006, where Mathews was her teacher.

Hudmon recounts that she moved to Bainbridge her junior year and was struggling with the idea of starting a new high school and what direction to take when Mr. John Hinson approached her.

“Mr. Hinson convinced me to join the PLC school, and from there Mr. Mathews took me under his wing and helped lead me to my goals,” Hudmon said.

“I was able to graduate high school with honors and just a few classes shy of an associate’s degree at Bainbridge College,” she said. “Mr. Mathews was willing to facilitate my classes, give me tons of advice and guidance, and helped make a way for me to achieve my goal.”

Hudmon said that although it has been 15 years since Mathews was her teacher at the PLC program, she was still overcome with so much sadness when she heard of his passing.

“I was immediately flooded with memories of his infectious laugh and smiles,” she said. “His encouragement and guidance helped me accomplish many goals I set for myself and my education, even beyond his classroom… the path I took was not traditional, and I’m sure presented some challenges at the administrative level, but what was important to me was equally important to him.”

Hudmon describes Mathews as a wise, selfless, funny and kind man and someone she is forever thankful to have crossed paths with.

Former BHS student, Roman Harrison, who graduated in 2019 could not have agreed with Hudmon’s statements more.

Harrison recalls Mathews as always being supportive inside and outside the classroom.

“He was every football game,” Harrison said. “After the game was over, he would come and talk to me and tell me how proud of me he was and what he thought of the game.”

Through these interactions, Harrison said he built a relationship with Mathews and met a real, genuine man whose smile could lite up a room.

“It brought me to tears when I heard what happened,” Harrison said. “The Bearcat community is really close, but Mr. Mathews had a way of making us closer… he was a nice, loving and endearing man that brought up a lot of young minds.”

Harrison said over the years Mathews always told him to have faith.

“No matter how bad life got, always have faith in God is what he would tell me,” Harrison said. In the midst of this devastating loss, Harrison said he has turned to put his faith in God, just as Mathews would have wanted.

Faculty members who worked with Mathews shared sentiments similar to the students, saying how he was always supportive and always caring about others.

“He looked out for his employees in every aspect- he certainly did for me,” she said.

On a Friday in October, Pugh was feeling unwell, but was determined to go to work because her students needed her. When she arrived at work, Mathews noticed something was off and stated, “Doc, you don’t look just right- are you okay?”

Pugh said she responded sarcastically, but about 45 minutes later, Mathews was at her door with the school nurse, telling her that he had already emailed her daughter and she was to go straight to the doctor.

As it would turn out, Pugh had COVID-19. During the next four weeks, Pugh said Mathews called or emailed she and her daughter to check in.

“I will miss his concern and care about each of us, I shall miss his calm demeanor in handling situations and I shall miss his jovial character walking the halls of Bainbridge High School,” Pugh finished. “May God bless and keep his beloved family wrapped in his loving arms.”

Taunton said she met Mathews before she even entered the world of education. However, some years after that she went to work as an elementary school teacher in Decatur County.

“During instructional rounds that year, Roy was one of the administrators that came to observe my elementary classroom,” she said. “He came back to my room at the end of the day to take the time to tell me just how much he enjoyed my lesson and that he believed I was going to be very successful at teaching and impacting the lives of students.”

Taunton said she remembered thinking when he left just how much it meant to her that Mathews took the time to stop back by her room and encourage her.

“I never thanked him enough for believing in me and his students the way that he did,” Powell said.

Powell said Mathews encouraged her to push boundaries and not hold anything back both in her teaching career and in her connections with her students.

“He never set limits on what my creative mind could devise, and gave me free reign to do my job,” Powell said. “That trust in me made we want to perform well for him and rise to the occasion.”

Powell said Mathews made teaching seem less like work and more like the pursuit of a higher purpose.

“He made me thankful to come to work every day, and the halls at Bainbridge High School feel so empty now that he’s gone,” Powell said. “The hearts of his Bearcats are broken, but the memories we have with him will fill the cracks in our broken hearts,”

One Bearcat that has both worked for Mathews and played for him has years full of memories to fill his heart with.

Christopher Bryant, nicknamed “Roy’s Boy” said he didn’t have the typical relationship with his coaches.

One of those coaches was Mathews. He remembers Mathews asking him to swap the laundry, when he was the player’s errand boy his Junior year and Mathews telling him that he could drive his truck.

When Bryant would return from laundry duty, he said he would often sit at Mathews desk and talk about ball and life in general.

Years after Bryant got his teaching certificate, Mathews hired him at Hutto Middle School and helped him get a job as a baseball coach with Brian McCorkle.

In 2018, the Lady Cats made a run for the state title and Mathews was there to celebrate with Bryant the entire way.

“We were winners, and it was directly related to the expectation Roy set for us all,” Bryant said. He remembers Mathews telling him to always be excellent in all he did. This quote was something, Bryant, along with other faculty members and students bought into.

“Roy was a game changer,” Bryant said. “Not many people have the opportunity to call their principal one of their best friends. Fortunately, for me I did.”

Taunton agreed with Bryant, saying Mathews was more than an incredible leader; he was everyone’s friend.

“He truly cared about everyone and he showed it in everything he did,” she said.

More than anything, though he was proud and cherished his family.

“His family was everything to him,” Taunton said. “He talked about them every day and everyone knew what his family meant to him.”

“While Roy took great pride in his work, he was even more proud of his family,” Johnson said. “He didn’t mind bragging about his girls’ accomplishments or how lucky he was to be married to Brittney. As an old football coach, Roy had a tough exterior, but he really had a huge heart.”

The Decatur County Board of Education and beyond is devastated by this loss.