Rotary Club gets ready for some football 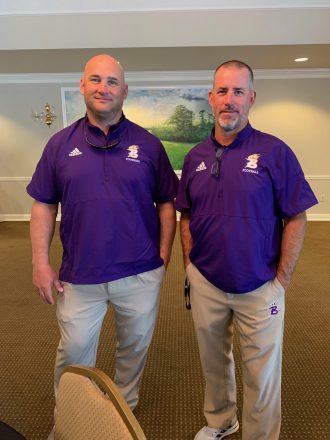 Bainbridge Rotary Club heard from the Bearcats head coach Jeff Littleton Tuesday, who described some the preparations that have been ongoing throughout the spring and summer to get ready for the opening football season.

He referred to the team members as “an investment,” saying the coaches’ intentions are to teach accountability and things that will help them survive in life. “We try to make a difference,” he said.

“We have had a really good off -season, and a great workout. Our spring coach, Ryan Kineard is here with me today.”

He described some of the work ahead of them to have a great season. “We lost 14 seniors off the team last year;” but I feel we are stronger as far as physical strength is concerned.”. Physical strength alone doesn’t win ballgames, but you have to work on mental strength and diversity, but our kids are working hard.”

The numbers of kids going out for football at the middle school last year was lower than the usual 90 – down to 40, with the pandemic, etc. But they’re all back now with a head count of about 80.” Littleton said they also had 25 freshmen who showed up for summer workouts.

He described the summer workouts as going well, as they visited Auburn, Florida State and Troy State and competed well in some areas.

“The defense is probably our strength going into the season,” said Littleton; but they are in need of some secondary changing. All in all, Littleton feels the team is in better shape than last year.

“We made it to the semi-finals last year, and we expect it to happen again this year,” he said. “We have a high standard and the kids have been working really hard.”

There will be a scrimmage this Friday night, while the first actual home game will be September 3 with Valdosta.

“We are really looking forward to a great season.”