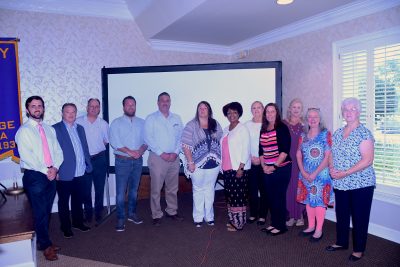 The Bainbridge Rotary met for their regularly scheduled meeting Tuesday at the Bainbridge Country Club. The speaker of the day was Fred Rudbeck, chair of the Bainbridge-Decatur County United Way. Accompanying Rudbeck were various representatives of the United Way’s funded agencies for 2022; these included Debra Murray and Sheri Haskins with the Halcyon Home for Battered Women, Ronnie Burke with Decatur County Family Connection, Josh Paske with Friendship House, Merreann McDonald with the Salvation Army, and Chris Beam with Samaritan Counseling Center.

Rudbeck first went over the founding of the United Way in 1887, before moving on to the structure of the organization itself.

“The organization itself has about 2,900,000 volunteers, close to 3 million volunteers,” he said. “Across the globe there are 1,800 United Ways, in 41 different countries.”

He then went into the three areas of focus to the Way in regards to “advancing the common good”: education, income and health. After this introduction, each representative of the organizations stood up and gave a brief description of their work. After this, Rudbeck discussed some of the projects the United Way has helped the Bainbridge community specifically.

“A couple of years ago, when Michael came through here, United Way Worldwide gave us a large amount of funding that had to go toward Michael-related projects,” he said. “From that, we’ve been able to assist six families and put roofs on their houses, because you all know how much a roof cost.”

Rudbeck concluded the speech by thanking the Rotary for being allowed to speak, and reminding people that their funding makes a difference.