Post- Searchlight editor emerges with a win at GPA 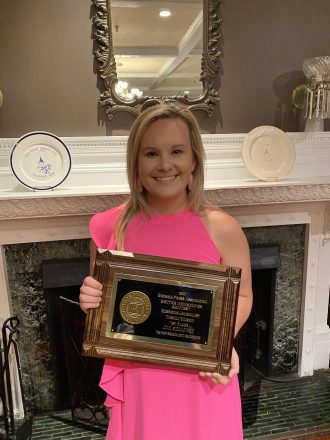 Thursday afternoon’s festivities began with members being inducted into the Hall of Fame posthumously. Among those inducted, was former editor Samuel “Sam” Marvin Griffin Jr.

Following a round of applause, editors and publishers had the option of attending various seminars such as, “How to sell more Newspapers,” “The Art of Storytelling” and “Content is Key.” All seminars were led by board members and fellow publishers in the Georgia Press Association.

Friday afternoon, newspaper attendees were invited to the Better Newspaper Advertising Contest, where The Post- Searchlight won first place in the food category for an ad designed to promote Carter’s Fried Chicken’s D-Bone.

Later that evening, the Better Newspaper Contest for the editorial division was held.

During the dinner portion of the event, various photos taken throughout the year by award-winning photographers were shown before emcee Len Robbins gave out the first award of the evening.

The first honor was awarded to The Post- Searchlight Managing Editor, Jill Holloway for the Emerging Young Journalist in the Weekly Division.

The award is given to journalists younger than 30 with less than five years of experience writing professionally for a newspaper. The candidate has to demonstrate excellence and maintain high standards of quality and ethics in order to qualify.

Holloway was thrilled to receive the award and have her parents in the audience to support her.

“When I was a sophomore in high school my English teacher told me I showed no promise and I would never write professionally,” Holloway said. “This award proves to me that you can do anything you set your mind to.”

Holloway, along with former Managing Editor, Powell Cobb went on to win several additional awards throughout the evening.

The Post- Searchlight staff went on to win second place in Special Issues/Section for their 2020 edition of Heroes, which spotlighted the nurses and doctors on the COVID-19 frontline.

The final award The Post- Searchlight took home was given to Holloway and Cobb for their front page layout and design of the Wednesday print edition.

Holloway said she was thankful for the opportunity to represent Bainbridge at the annual convention and hopes her work will only go up from here and that she, along with the rest of the staff can continue to provide the stories readers want and enjoy.