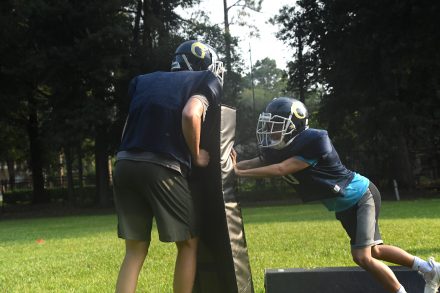 Juniors Kevin Brooks and Ben York practice their form at summer practice. Physical conditioning has been a top priority for this year’s team.

“We have a full 10 game season,” he said. “With us only getting to play five games last year, and we ended up winning one, we’ve got to be in the top four in our region, of six teams, to advance to the region play-offs. So if we can beat three teams, we’ll be sitting pretty.”

In preparation for the coming year, Godwin has had the boys practicing offense and defense strategy, but has put an emphasis on physical conditioning: “That was our downfall last year, we weren’t as in shape as the other teams.”
This season will see GCA playing against public schools, with their first game scheduled to be against Baker County.

“We can cross over, it obviously doesn’t count towards our region stuff,” Godwin said. “We can opt to play, and they’ve got an agreement through the GHSA, we can cross conferences.”

As the Grace sports complex has yet to begin construction, home games will be hosted at the Bill Reynolds Sports complex.

“We’ve worked out an agreement with them to use the field, and hopefully, for next year our facility will be built.”

The school is planning to have online tickets, but will start the season with traditional tickets purchased at the field.

This team has been something the school has been working towards since Godwin was hired as athletics director last year, and plan on giving the new football team the same treatment as other schools.

“There’s a bunch of girls on the cheerleading team that haven’t cheered in the last few years, but they want to cheer because of the excitement of football. We’re gonna do homecoming this year during football instead of basketball… we’re gonna do a Pink-Out game for breast cancer,” he said. “We’ll do something for basketball, but it won’t be the full-blown homecoming we’ve done in the past… we’re just trying to let the school know what a real football season feels like.”

Despite having a full season, the Cougars will still be playing eight on eight.

“There’s a lot of schools in Georgia that are smaller, like that single A and double A classification, that are going to this eight man,” Godwin said. “The push from our conference is next year to be playing nine man. They’re wanting to do away with eight, go with nine man, and then eleven man.” With ten players returning and seven new players added, the team isn’t quite there in terms of eligibility for eleven on eleven. “We’re trying to get there as soon as possible… We need about 24 to 25 kids to do eleven man, and we’re still around that 16 to 18.”

The GCA Cougar’s first game will be at home, August 20, against Baker County.