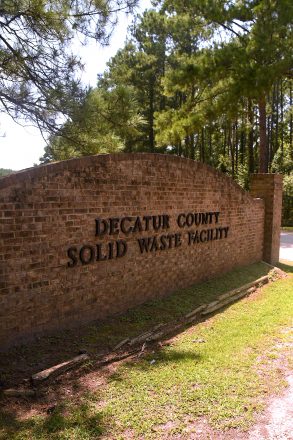 The Decatur County Solid Waste Facility requires another vertical and horizontal expansion, due to debris influx from Hurricane Michael.

On Tuesday evening, the Decatur County Commissioners met for their second monthly meeting. One of the items on the agenda was consideration for approval to proceed with new horizontal and vertical expansion of the construction and demolition (C&D) waste unit at the Decatur County Solid Waste Facility.

In order to keep the landfill in check with Georgia EPD rules and regulations, the county must update the site’s design and operation plan every five years. With the deadline of January 1, 2022, approaching, one major update County Administrator Alan Thomas presented to the Commissioners was the horizontal and vertical expansion of the landfill’s C&D unit, as the influx of waste from Hurricane Michael has reduced it’s life expectancy.

The projected life expectancy left in the unit is only about 4 years. The process to review the site and finalize the permit is projected to take until August of 2023.

“The main thing is that we continue to operate the landfill within the regulations set by the EPD,” Thomas concluded.