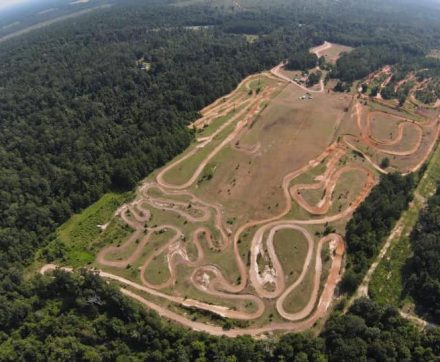 A drone shot of the track the Bulger brothers purchased.

According to Acts 2:17, “…your young men shall see visions, and your old men shall dream dreams.” Cole Bulger certainly thinks there’s something to that verse, now that he and his brother Hunter have acquired Southern Raceway MX Track. According to Cole this isn’t just a dream come true in the metaphorical sense, but literal.

“I’ve always dreamed of owning this place,” he said in an interview, “But what’s weird is my mom had a dream about two and-a-half, three years ago, of me with two kids, and owning the track.”

With one child already and another on the way, this makes owning the track not just financially significant to him, but spiritually.

Cole has been involved in motocross since about the age of seven, when his childhood friend Marc Fleetwood got him into it. From there, he would go on to compete in the Amateur National Motocross Championship at Loretta Lynn’s, and finally settling in to own South Georgia Motorsports here in Bainbridge. His brother Hunter would go on to get involved in real estate, currently representing Keller Williams for southwest Georgia.
The race track was originally owned by Bainbridge motocross driver Ezra Lusk, and was where Lusk and Ricky Carmichael would train. After Ronnie Lusk passed, the property was left to Shane and Mrs. Lusk, who sold it to the Bulgers on the first of July. It had since become overgrown, but within the first two weeks, they had made four of the seven tracks useable. According to Cole, the plan is to have the grand opening in roughly two month’s time, after the completion of the Pro track.

“We’ve had to rent and purchase a lot of equipment for this project,” Cole said.

They are currently in the process of acquiring a bulldozer to work on the Pro track, which is just over a mile long, and situated on a hill.

But the Bulger brothers don’t just see this track as a way to make money.

“Our motocross number since I started was 220,” Cole said, “which stands for Galatians 2:20; ‘I am crucified with Christ: nevertheless I live; yet not I, but Christ liveth in me: and the life which I now live in the flesh I live by the faith of the Son of God, who loved me, and gave himself for me.’ We want to use this track for the furthering of the Kingdom of God, and not the glorification of me and my brother.”

In addition to training young riders for potential competition at Loretta Lynn’s, the brothers also hope to use the track for church-related events and functions.

BHS Construction Educator honored as CEFGA Teacher of the…