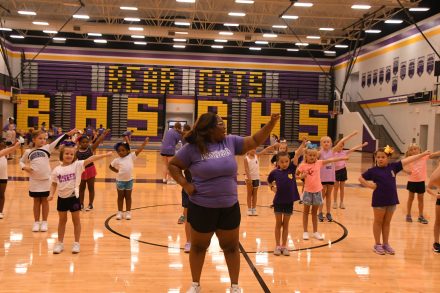 Senior Bearcat cheerleaders led the girls in learning the Purple and Gold cheer.

BHS Cheer Sponsor, Mycla Palmer said this is the largest group cheer camp has ever hosted, but she couldn’t be more thrilled.

The campers will have the opportunity to learn cheers, a dance, how to tumble and jump, along with cheer motions that they will then perform at a parent show on Thursday.

While the campers learn the basics of cheer, they also have the opportunity to participate in themed days. Tuesday saw the girls all sporting wacky hairstyles, while Wednesday the campers can wear crazy socks and Thursday they can deck themselves out in purple and gold to represent the Bearcats.

This is something all the campers are really looking forward to.

Olivia, 5, said she is most excited about the dance and cheer, while getting to show her parents.

“I don’t know any of the cheers yet, but I know I want to be a cheerleader,” she said.

Wanting to be a cheerleader stems from the relationship some of the campers have developed with the varsity squad. Palmer said the 3rd-5th grade groups are their largest age group this year, because so many of the younger girls have returned to hang out with the cheerleaders they have met in the past few years.

Palmer said the younger campers will also have the opportunity to cheer with the Varsity squad at a pre-game show prior to the first home game. She also hopes to do something new this year and get the campers to help cheer at the Syrup Sop.

Upcoming kinder-gardener Brynlee McMickle said she is most excited about getting to cheer for the boys on the football field.

Palmer believes the game the campers will help cheer at will be the Glynn Academy scrimmage and encourages everyone to show up and support the youngest Bearcat cheerleaders.

I still remember, fondly the first time I ever filled out a bracket for the NCAA men’s basketball tournament when... read more