A tribute to the Prince of Pasta 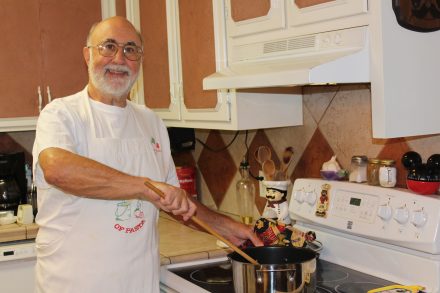 Jim Gisondi was known as the “Prince of Pasta” and could always be found in the kitchen, cooking up a delicious Italian meal.

Our family, and indeed the Bainbridge community, lost a good friend this week when Jim Gisondi passed away following a brief battle against cancer.

It is hard to fathom anyone with Jim’s enthusiasm and dynamic personality being gone.

When we first met Jim and his wife Linda they were prospective buyers for a home in Bainbridge, wanting to escape the long cold winters of Ohio. He and Linda were both retired from the U.S. Air Force, and lived near Wright Patterson Air Base at Dayton. For over a year they corresponded with my Realtor husband Ron, and made a couple trips to Bainbridge to check things out. Once the decision was made, they stayed with us for the several days it took to get relocated.

It was amazing how quickly we all bonded with each other. We would come home from work to find Jim had cooked a delicious supper for us, while taking care of our two dogs throughout the day. The friendship continued and grew after they moved into their new home.

It turns out Jim was a great cook, even an Italian chef, having once owned a restaurant in Bellville, Illinois. He also had many diverse interests. He had played banjo in a band in Ohio, and it didn’t take long for him to find his niche here in South Georgia. He and my husband entered a corn hole contest, thinking their athletic skills would should win. They lost to the local “pros.”

Jim became affiliated with what was then Bainbridge College, adding cooking classes to their continuing education curriculum. He later held weekly classes at St. John’s Episcopal Church fellowship hall, where he shared the joys of Italian cooking derived from his family’s recipes. His personalized cookbook went along with the course and many of us still have and use those books.

Food was often at the center of our activities. A group of other friends began joining with us each Wednesday for lunch at various local restaurants through the years. The location changed, but the fellowship remained.

We spent many holidays together and one vivid memory is the year he taught me how to make my own pasta for Christmas dinner.

Jim loved Bisons and their home reflects that love, as there are many bison related articles, statues and memorabilia on display.

Probably his biggest donation to society was his volunteering, along with his wife, at Bainbridge Health and Rehab. He and Linda went there each week, where Jim called Bingo for the residents and won their love and appreciation with donations of food and other items.

They became his best friends, and during the pandemic, when they could not visit in person, the two of them went weekly and visited through the windows with the patients, leaving treats at the doorstep.

The Gisondi’s were major patrons of Bainbridge Little Theatre and never missed a production. His generosity extended to donating one of his famous Italian meals for 10 or 12 for silent auction fundraisers, especially those for Memorial Hospital and Manor.

Jim loved being on the water, enjoyed kayaking and also made his daily walks around Bainbridge College campus, with his two rescue dogs, Ginger and Spice, for their daily constitutional. He was a supporter of the Bainbridge-Decatur County Animal Shelter.

He occasionally wrote columns for The Post Searchlight about his activities and was a frequent subject for Bainbridge Living magazine features, where he became known as the Prince of Pasta.

He proudly called Bainbridge home. He will be buried here, far from his hometown of Gloversville, New York, and his sister Marie and her daughter Beth have also joined in calling Bainbridge home.

Jim was opinionated and spoke his mind, sometimes offending others; but he personified the words of the song made famous by Frank Sinatra, “I Did it My Way.” He lived life on his own terms, which included being creative and generous to those he loved.