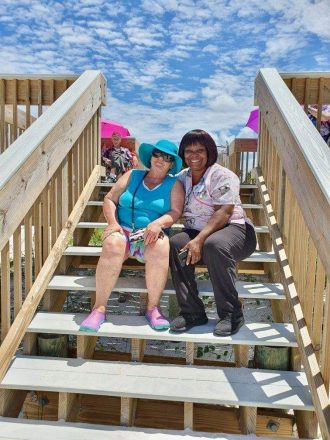 Audrey Clark sits with one of the residents of Willow Ridge Personal Care home during their day trip to Mexico Beach.

Residents of Willow Ridge Personal Care Home left on July 13 for a day trip to Mexico Beach. This marks the resident’s first outing since the pandemic.

“They’ve been so locked down,” director Audrey “AJ” Clark said. “We had a resident’s meeting, and I asked them did anyone have any ideas of something they’d like to do. And one of my residents, Ms. Jones, said, ‘I just wish we could go to the beach.’ And I said, ‘Why can’t we?’ And it just kind of grew from there.”

A total of seven people went, three residents, three staff, and the husband of one of the residents. Clark had called the area’s chamber of commerce prior to the trip for more information on areas that would be accessible, as all the residents required walkers.

“I did find out that, since Michael, they had built a boardwalk that wheelchairs and walkers can safely go out on. They went all the way out on the boardwalk,” she said. While there, the group ate lunch at Krazyfish Grille. Unfortunately, the beach was inaccessible to the group, with stairs being the only way to access the shoreline. “They weren’t able to get their feet wet… But they were able to sit on the deck. They sat there for a short amount of time, got a little sun.”

Debbie Jones, one of the residents who went on the trip, and the one who came up with the idea, also spoke to the Post-Searchlight.

“We had been in quarantine for 15 months, so after we got out of quarantine, naturally, I was ready to go somewhere and see something different,” she said. “I just did the beach because I’ve always loved the beach.”

“They loved it,” Clark said. “They got to feel the salt air, they got to smell it. Some of them thought they’d never see the beach again”

Willow Ridge is currently considering a second trip to the beach, potentially toward the end of September to avoid the summer heat. Clark said they are currently aiming at having at least one outing a month, with a matinee currently on the schedule, and residents looking forward to making trips to Scoops for ice cream.