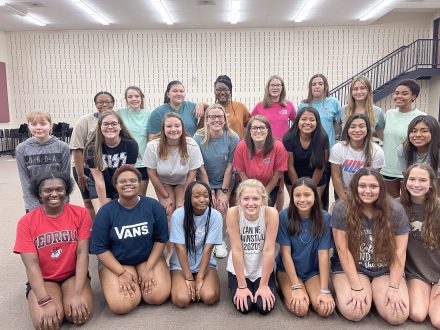 Members of the Color guard smile after a week long camp prepared them for practice on the field with the band.

The Pride of Decatur County, the Bainbridge High School band and Color guard could be found practicing on the field Tuesday morning.

New Color guard sponsor, Lark Holley said this year’s theme is Boston’s Greatest Hits. Fans can sing along to the likes of “More than a Feeling”, “Peace of Mind,” “Amanda” and a myriad of other songs mixed with “Smokin’.”

Band Director James Sewell said there was no real rhyme or reason for this year’s theme; he just likes their music and believes it translates over well when played by a band.

“I’m sure someone has probably done it before, but I think we will be the only ones around here playing that type of music and dancing to it,” he said.

The team has seven new faces and seven seniors to make up the team.

Holley said the routine is fast-paced, but all the members of the team seem to be having a really great time with it.

“I’m really excited,” she said. “I’m a former Color guard member myself and I know the girls are excited as well.”

Holley said every team member put in the hard work that was required of them during last week’s Color guard camp before they hit the field for practice.

“We have both routines down and are about three-fourths of the way done with the last song,” Holley said proudly.

Sewell echoed Holley’s statement saying the entire band has worked hard and that everything is going great thus far.

“The kids have put in the hard work and are excited to perform,” he said.

Fans can see the full performance on Friday nights at Centennial Field, and visitors will also have the opportunity to hear the band play, as they are allowing the band to travel to away games this year.