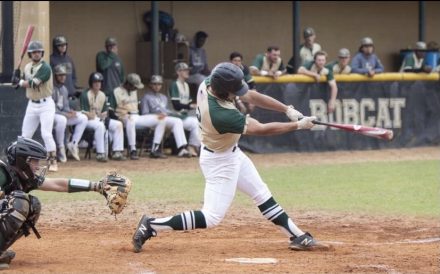 Conner Strickland led his team with seven homers over the years and hopes to do the same now for the Seminoles.

Former Bainbridge High School Bearcat baseball player Conner Strickland is getting the opportunity to live out his dream, as he recently received an offer from Florida State University to join their baseball team.

Strickland graduated from BHS in 2018 with an offer to play baseball at East Georgia State College in Swainsboro, Georgia.

He attended the junior college, where he played first base and was a standout in many games.

Last year during his season at East Georgia State College, he was contacted by FSU’s baseball coach, Mike Martin Jr.

According to Strickland, Martin contacted him after COVID-19 and told him he was interested in him. He then explained to Strickland he would love to eventually see him play for the Seminoles and they would talk again after his final season.

Strickland said approximately two weeks before this year’s season ended, his phone rang and it was Coach Martin.

Martin asked him again to wait, so he could see who got drafted and who would be returning to play for the Seminoles in the 2022 season.

Strickland waited and finally received the call he had been waiting on his entire life. Martin offered him a spot on the 2022 team.

“I’m a huge FSU baseball fan,” Strickland said. “It was my dream baseball school; it’s the best program in the country… sometimes I wake up and wonder if I am in a dream.”

Strickland said it feels like he is in Heaven.

Strickland hopes to play first base for the Seminoles this year, but said he will do whatever is asked of him.

“I just have to keep the faith and know that God has my life plan in His Hands and it will all work out,” he said.

Strickland will transfer to FSU with three Associate’s degrees. He received degrees in Business Administration, Psychology and Sociology. However, his hope is to eventually go pro in baseball. If that does not pan out, Strickland said he has a few different avenues he would like to explore including becoming an athletic director or an insurance agent.

In the meantime, he plans to begin working out with the team, following the first week of classes and only improve on the stats he had at East Georgia State College.

Strickland graduated from the school after being named a first-team All- Region player in the GCAA.

He led the team with seven homers and was second with 38 RBI. He swiped nine stolen bases. He was additionally named the Gold Glove 1B in his region. Throughout the season, he had just two errors and compiled a .994 fielding percentage.

“I want to be the best at whatever it is I do and at whatever I can do to make the team the best they can be,” he ended.