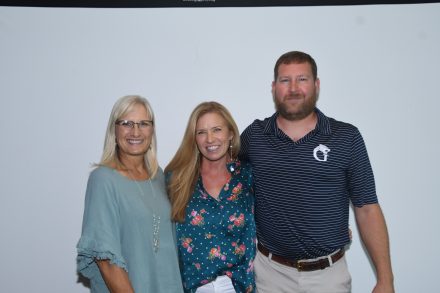 Cile Warr, Mardi McRae and Lance Godwin smile after speaking to the Rotary Club about the exciting expansion happening at Grace Christian Academy.

The Bainbridge Rotary met for their regularly scheduled meeting at the Bainbridge Country Club on Tuesday. This week’s speakers were Cile Warr, Mardi McRae and Lance Godwin with Grace Christian Academy. The three played a brief video on the history of Grace, before getting to the main point of their presentation, Grace’s new athletic complex expansion.

“We’ve entered a phase right now that’s been unprecedented for us at GCA,” McRae said. “We have waiting lists for classes, we’ve built sports teams; normally we’re recruiting kids to finish filling out sports teams… But now we’re at a phase where we have these kids coming out of the woodwork.”

This new athletic complex was intended to be located at Bill Reynolds Sports Park. However, the location has now changed, and has yet to be announced. A baseball and football field are currently being planned, with the football field doubling as a soccer field, and a track planned to encircle both. The school’s original goal when planning began was $700,000; they have surpassed that, with $1.1 million currently raised, and a new goal of $1.2 million.

“We have a full season this year,” Coach Godwin said. “We’ll be 1A, small as we are. We’ll have 10 full games, we’ll have homecoming during October. Just get ready for an exciting year.”

Ground will be broken in mid-September, with tractors and machinery expected to begin work by the first of October. Any donations or inquiries should be directed to McRae, who can be reached at mmcrae@gcacougars.org.