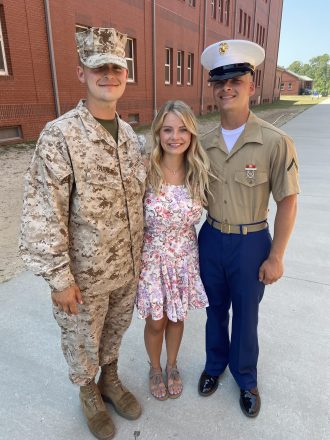 Through the years the Parker triplets, children of Mitch and Vickie Parker, have been very involved in sports and academic activities at Grace Christian Academy. They also managed to work in a variety of part-time jobs, including Chick-fil-A. They have generally been together in their activities, including their participation in their church. They have been considered a unit and have always supported one another up until the time they graduated from high school in 2020.

Naturally, they then began finding their own way in the world. They were each taking college courses and had an idea of their field of interest.

Then, suddenly, everything changed. In October of 2020 Gabe decided he didn’t think college was for him. He was working at Parker Paint full-time and working out with exercises every day.

He always had a desire to be healthy and live with higher standards, according to his mother, Vickie. A friend of his had recently graduated from Marine boot camp and Gabe decided that was what he wanted to do too.

Shortly after his announcement and departure, Seth decided he also wanted to become a Marine. This was a great shock to his family who was still trying to adjust to the absence of Gabe. Seth had met with the recruiter, Joshua Stinson, Marine Staff Sergeant in Thomasville when the family dropped Gabe off.

Seth’s parents urged him not to be impulsive – to consider other options – telling him there is a perfect plan and purpose for everyone. But Seth was not to be discouraged, and he too reported for basic training.

This left the last third of the children, Dani, at home alone. She tells how she held herself together for the first 13 weeks as her parents were a mess. “It was life changing for me. I felt like 2/3 of me had gone,” she explains. Neither brother could call home during boot camp, which lasted 13 weeks, then two weeks of quarantine due to COVID-19. “I missed them so much.” She acknowledges that she is now expressing the pent-up pain she had always felt.

Meanwhile, Seth didn’t want Gabe to know he was coming. One day as Gabe was marching in formation he saw a guy in a gray shirt stand up and point a finger at him. They made eye contact and Gabe realized it was Seth. He had recently arrived and was waiting to get the required haircut. The boys were four weeks apart in their training and separated from seeing each other.

Somehow they both ended up in the 3rd Battalion, in spite of the difference in time frame, and were housed three buildings apart. They saw each other at chow and at church, but weren’t supposed to talk to each other. They used sign language in the lunchroom to signal each other to meet in the bathroom so they could talk. Time came for Gabe’s graduation and Vickie said they had been told that only two people would be allowed to attend due to the pandemic. “We all needed to be at the graduation, and I told them, “I am going to pray it into existence.” She made reservations for two rooms and within the week received notice all could attend – all except Seth, of course, who was still isolated at a different level.

Two days before Gabe’s graduation, Seth’s senior drill sergeant asked to meet with the family. Having learned that the two were more than brothers, they were part of triplets, he told the parents he would do all in his power to have Seth there to be with the whole family, Sure enough, the drill sergeant received consent for Seth to be with the family from 10:15 a.m. to 2:30 p.m.

Gabe graduated on May 28, which coincided with his father’s birthday. From there he proceeded to military combat training.

At the time of this interview, July 7, Gabe had completed MCT and been assigned to military occupational service, stationed in Ft. Lee, Va. Seth graduated from boot camp on June 25, and is still in MCT at Camp Geiger, N.C.

Before a recruit graduates from Boot camp he must go through what is called the Crucible – a 54-hour strenuous final test mission where candidates run 40 miles, over 30 obstacles and basically test all the skills they have developed to become Marines.

Gabe’s military training has been designated as pursing logistics, and Seth’s to aviation operations.

Due to COVID, none of the boys have been allowed to come home yet. “Seth may get to come home in the next few weeks,” said his mother hopefully, adding, “Gabe is stuck there for awhile.”

In the meantime, Dani continues to hold things together at home, devoted to her studies.

When asked if she too would like to join the Marines, she replied, “No. I plan to become a nurse, like my mother.” She did add, however, that she was somewhat fascinated by the female Marines she witnessed at graduation.

Since the date of the interview Dani has received notification of her acceptance to the nursing school at SRTC, starting this Fall.

Her mother added that the boys have told her that the trials and tribulations they have seen their family work through have helped them persevere through this.

Vickie says the family is all Christian and the children were all raised in a spiritual environment. She is convinced that this is all God’s plan. As a mother of triplets she has developed a personal mantra, “Can’t ain’t in my vocabulary;” and closes with the family motto, “In this family we do nothing half-assed.”