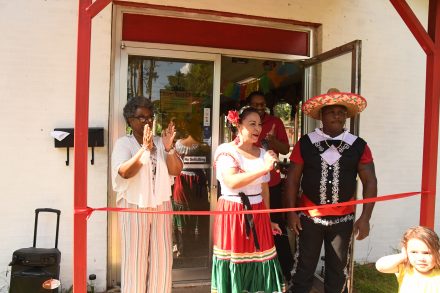 Patricia Rodriguez speaks to everyone at the soft opening of Cocina Soul of the Border, while her fiance Ronnie Allen looks on.

Patricia Rodriguez and fiancé Ronnie Allen are Bainbridge’s newest residents and business owners. The couple recently opened an authentic Mexican restaurant, Cocina Soul of the Border on Scott Street, which strives to fill customers both physically and spiritually.

Originally from Albuquerque, New Mexico, the couple moved to Bainbridge three months ago after they said they felt a calling from God.

Prior to moving, they owned and operated a restaurant in New Mexico, where they were heavily involved in the community and often provided up to 100+ meals for the homeless population.

While Bainbridge doesn’t have the homeless crisis that some other areas are facing, Rodriguez said Cocina Soul of the Border will be another ministry-based restaurant.

“It will be our way of supporting the community,” she said. “We want to provide backpacks for kids when they go back to school, food boxes for the elderly and we have joined with Hope Farms.”

Hope Farms is a rehabilitation program for women, which is faith-based. Rodriguez said her goal is to somehow incorporate the food from the farm into the restaurant or have the women come in and help on occasions.

Rodriguez has already used her servant’s heart to help one customer, who seemed to be struggling.

She said she was in the kitchen making lunches when she noticed a man counting out how much one drink would be with tax in all pennies.

While watching the man, Rodriguez admitted she made an error on an order and instead of tossing the plate she brought it out to the individual.

“He was really surprised because he didn’t order this, but I could tell he was hungry and I wanted him to have a place he could sit down and eat with dignity,” Rodriguez said. “I didn’t want him to feel like he was being pushed out or loitering; he deserved to be here.”

The customer was given one of Rodriguez’s dishes that was created from scratch by her mother’s recipe.

Rodriguez explained most of the dishes on the menu come from family recipes, rather it be from her or Ronnie’s mother.

“Ronnie creates more new Mexican dishes because he was more in that culture, while mine are all pure Mexican,” she explained. “We are two separate identities; they are very different.”

Since putting some of her authentic dishes on the menu, she’s noticed people are a little hesitant to try things such as mole, which is a brown sauce she makes and puts on the chicken. She has since simplified the menu in hopes guests feel more confident in what they are ordering.

They will also offer a daily agua with fresh fruit, including pineapple and cantaloupe this week.

While their authenticity sets them apart, Rodriguez really wants their faith to set apart the restaurant as well.

Each table has prayer cards that customers can fill out and put in a box by the register. The prayer cards are kept confidential and are only seen by Rodriguez and Ronnie during their weekly Young Disciple Group meetings and Bible Studies at the restaurant.

“Above all, this isn’t really our restaurant; it’s God’s restaurant,” Rodriguez said.

With God’s help, Cocina Soul of the Border saw an influx of customers on their first day and word has spread quickly throughout the migrant workers, who have greeted the couple with open arms and welcomed them to the neighborhood.

For those who would like to enjoy a new taste of authentic Mexican food and welcome them as well, Cocina Soul of the Border is open Tuesday- Saturday from 11 a.m.- 7 p.m. The restaurant is also on Facebook and Instagram, where they share their daily specials.