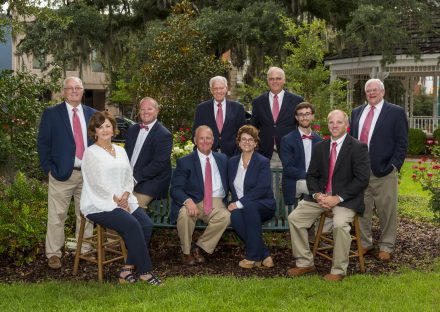 Ralph and Caroline Ivey started Ivey Funeral Home in 1950, and passed ownership to their son Richard “Dick” Ivey in 1985. Max Bryant began working at Ivey in 10th grade, where he said Ivey, Sr. instilled in him a conviction to treat the funeral business as more like a ministry than an actual business.

“His desire was just to take care of people, that was first,” Bryant said.

The Ivey family would go on to sell the funeral home to Rollings Funeral Service in 2012. Now, Bryant, his wife Dana, and multiple former Ivey staff have come together to start their own funeral service, Bryant Funeral Home.

“I explained to them what we were doing,” Bryant said of the other co-workers who joined the new endeavor, “and they just made the decision… We’re running a business, but it’s more of a ministry to everybody here.”

He elaborated on this ministerial approach, and how the funeral business deals with people at their lowest: “This is the worst part of their life. When they come in here, it’s the worst day of their life. We just want to help them wade through those waters, and it just allows us to do more of what we want to do, or feel like we’re led to do.”

Having only opened their doors last Tuesday, Bryant offers services from cremation to full funerals, though there are still some finishing touches being put on the building, namely waiting for the chapel’s chairs and their specially painted hearse to arrive. (They have been provided a hearse to use in the meantime.)

One thing that Bryant emphasized was the fact that their home is locally owned.

“I think in a community our size that’s very important,” he said. “Not that the other guys are bad guys, there’s just a certain amount that’s added when the ownership is the people you go to church with, shop with, interact with in the community.”

They further emphasized this in a press release, stating, “The Bryant family and staff are the people you know and trust. At Bryant Funeral Home, we’re not just local faces; we’re 100% locally owned. Our investment in the community is a reflection of our beliefs in hometown values and personal connections. When you walk in Bryant Funeral Home, you will receive professional, compassionate, and personal service driven by our desire to treat you like family.”