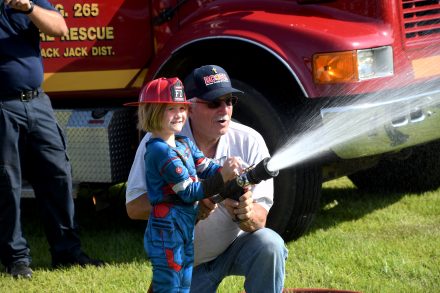 Milestones Pediatrics opened up their day camp, Camp Milestones, earlier last month, being primarily targeted at children with disabilities, with a total of 80 campers attending so far. Each week of camp lasts from Monday to Thursday, with each week having a theme. This past week’s theme was superheroes, with children allowed to dress up as their favorite superhero, and received visits from real life “civil superheroes,” the men and women of Bainbridge Public Safety and Decatur County Fire and Rescue. During the week, kids were taken out to Spring Hill Tree Farm, where they could go on a mini-train ride, play with water guns, and were allowed to climb into the driver’s seat of fire trucks, hop on a gurney and even use the fire truck’s hose.

“It’s been wonderful,” Milestones CFO Kristen Palmer told the Post Searchlight. “We have had a lot of kids say their first words while they’ve been out here on the farm, we have had a lot of progress, and been able to expose the kids to a wide variety of situations, and have some peer interaction.”

Getting kids out of the pediatrics office was one aspect of the camp she put emphasis on, saying, “It’s been wonderful to see these kids in another type of environment than the four walls of the outpatient clinic.”

According to Palmer, parents have loved the camp as well: “The response from the parents has just been so appreciative and grateful, so that has made it all worth it.”

Next week will be a Hawaiian themed week, with campers allowed to dress in beach gear. Those that attend camp on clinic days will have dancing with Kacee Franklin, while those attending on farm days will need towels and swimsuits. The last week of July will be a “commencement,” with parents encouraged to attend, as there will be a slideshow presented, and campers will be awarded a certificate.