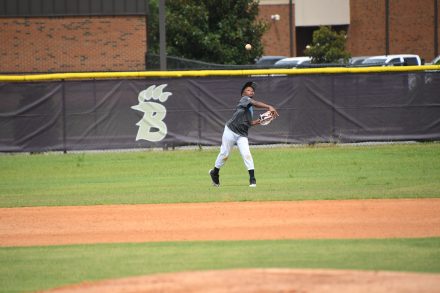 Kids worked on their outfielding during Balling with the Bearcats camp, which was held this week with the Rec. Department.

First thing Monday morning, the Balling with the Bearcats baseball camp began in earnest, with about 25 to 29 kids from ages 8-14 coming out to play. The camp is held as a partnership between the Bainbridge Decatur County Recreation Authority and the BHS Bearcat baseball team, with members of the team, as well as Coach Donnie Coxwell himself, coming out to help.

“The first day went really well,” Coxwell said. “There’s some real talent there. I heard about how they did in the all-stars, but I didn’t see any of that.”

The Bainbridge rec boys lost both games in the GRPA 10 and under Baseball State Tournament in late June.

“I was very encouraged,” Coxwell continued.

The boys focused on defense in the in-field and out-field on Monday, hitting and swinging on Tuesday, and pitching and catching on Wednesday. They will culminate by practicing all of what they’ve learned on Thursday, followed by a water day on Friday.

“It’s coming along, they’re definitely learning different things,” Ryan Riles told the Post-Searchlight. “It’s definitely helped them out a lot, and they’re definitely improving and learning a lot… The future is bright in Bainbridge, we just gotta get kids out to continue to come out and put in their all to get better at the game of baseball.“

The camp is part of a pipeline program that, according to Coach Brian Johnson, that will transcend from the recreation department to high school level, so the Bearcats can again make it Final Four and state championship.

One of the boys, upcoming sixth-grader Clayton Alday, said of the camp, “I give it a nine out of ten.”

He said he plans to play “whatever comes up” when asked about playing rec ball and potentially playing for the Bearcats.

Try-outs for the travel ball team are scheduled for next week, from July 19-21, with 8 and under set for Monday, 10 and under for Tuesday, and 12 and under for Wednesday.