Bainbridge native wins Veteran of the Year for LA County 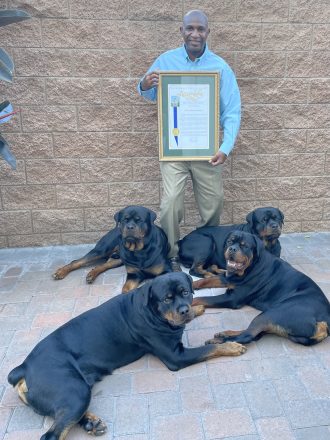 Originally from Bainbridge, Dr. Michael Biggles, the son of Mrs. Josephine and Mr. Willis Biggles received the “Veteran of the Year” award for the 58th District in Los Angeles County, California. Michael was selected for his accomplishments in the U.S. Navy and the service he and his Rottweilers provide to active duty military personnel, veterans and their families in Southern California. Mrs. Biggles, along with family members and friends from the south all the way to the west coast, attended the ceremony on a zoom conference. Michael’s Rottweilers named, Rambo, Retro, Rascal and Rosh are AKC S.T.A.R., CGC, UCGC certified. They have won numerous ribbons at dog shows throughout Southern California and received awards from Rottweiler clubs. The Rottweilers were on the national AKC.TV channel and featured in published articles. Dr. Biggles lives in California and has over 28 years with the federal government.