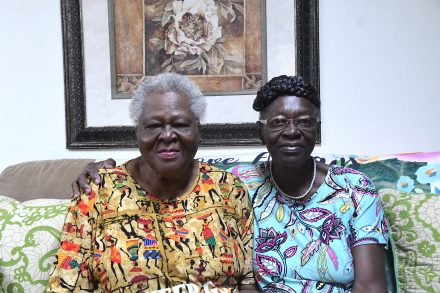 Classie Rambo is celebrating her 97th birthday this weekend. She and her daughter, Wilhemina Mitchell, spoke with the Post-Searchlight about her long life.

The year is 1924. The Roaring 20s are still roaring on, with the Great Depression and World War II still years away on the horizon. Primary communication is by mail, radio and telegraph, with TV, cell phones and the Internet nowhere to be seen, and the first transatlantic phone call still three years from being placed. It’s hard to imagine a time like this, and many have only read about it in the history books. But there are still those that lived it, and still tell their story.

Mrs. Classie Rambo is one such person. She recently celebrated her 97th birthday on July 5, with a large birthday celebration planned for Saturday. In regard to turning 97, she said, “It feels good after what I’ve come through. It feels good.”

Rambo grew up on Spring Creek Road, and was raised farming.

“I come up working on the farm. I worked, I plowed, I hoed, I done everything to be done, really.”

She reflected on how much farming alone had changed in the near-century since.

“They don’t do that no more, hoeing, picking peanuts, and plowing, stuff like that,” she said. “They got tractors now… I used to do that with a mule.”

She recalled a time before bussing, getting to school by walking, and sometimes riding in the back of a truck. Having lived through most of the 20th Century, Rambo witnessed changes throughout the world besides advances in farming and transport, so much that it could be overwhelming.

“So much has changed now you can’t hardly place it,”’ she said.

She would graduate from Union Norman High School in 1940, and go on to work at Elberta Crate for five years, before settling down and starting a family. She would marry twice, first to Goolsby Crews (now deceased), and then to William T. Rambo, (also deceased.) She would have 2 daughters, Wilhemina Mitchell and Catherine Miller (deceased), as well as a step-son, Artis Rambo, followed by four grandchildren, five great-grandchildren, and one great-great-grandchild.

When asked what she would do for her 100th birthday, Rambo laughed and said, “I’m gonna be crazy. I’ll celebrate with everybody. Everybody can come and eat everything they want. They’re gonna have an eating good time.”

Rambo and Wilhemina both wanted to thank everyone who sent her gifts and prayers.

“I want special thanks to my nieces, Sonja Pew and Ruby Anderson. I pray they continue to help me,” she said.