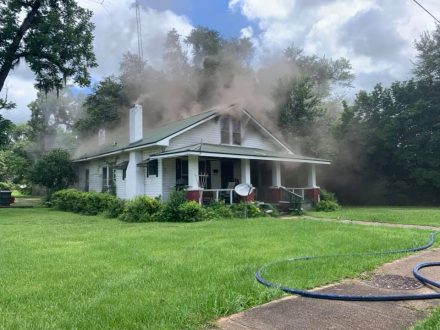 Bainbridge Public Safety responded to this home on July 1, after a homeowner woke up smelling smoke and found an electrical fire in his bedroom.

At approximately 12:33 p.m. on July 1, Bainbridge Public Safety responded to a structure fire at the intersection of Broughton Street and Lewis Street that left the home unlivable due to smoke damage.

BPS Fire Chief Doyle Welch said they arrived on scene and quickly began hosing down the fire. Assistant Chief Ryan Dean then began his investigation, citing the fire as an electrical fire that began from an outlet in the homeowner’s bedroom.

According to Welch, the investigative report showed that a power strip had been plugged into the outlet and was being used to power the entire room, including powering the window AC unit.

The single outlet then became overloaded and started a fire.

At the time of the fire, the homeowner was reportedly asleep. He then woke up to the smell of smoke and called 911.

Welch said BPS was able to respond immediately, due to already being in the area. Because of this, the structure itself is still intact, although there is water and smoke damage.

Welch said this fire serves as a reminder to be careful with power strips.

“People need to be careful,” he said. “A receptor only has two plugs and when a power strip is plugged into it, the circuit can overheat and start a fire.”

Welch reiterated to never use a drop cord as permanent wiring, as it is not meant to power large appliances.