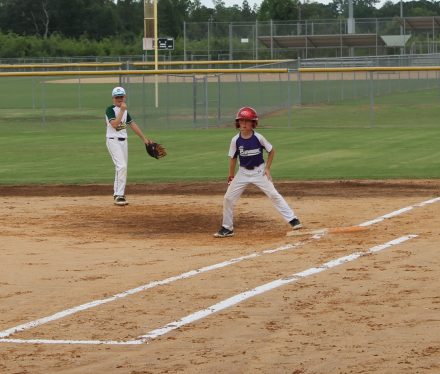 rantley McMillian stops on first base and looks, ready to steal second.

The Bainbridge Decatur County Recreation Authority hosted the GRPA 10 and under Baseball State Tournament two weeks ago, from June 22 -25. Teams from Pooler, Habersham County, Crisp County, Bartow County and Grady County came to Bainbridge to compete. Unfortunately, the Bainbridge boys lost both games, losing 19-0 against Pooler and 17-6 to Grady.

“Because we’re so young, all eleven guys, this was their first time playing live-pitch baseball,” Coach Brian Johnson said. “Obviously they’re not playing year-round travel ball, like other surrounding counties are. We are behind in that aspect.”

Johnson stated that there are plans to correct this, and to further develop the baseball program.

“Thankfully we’re starting a travel ball team this fall, that will hopefully put us in a position to have more skilled and developed guys going forward, so we can actually compete,” he said.

“This season was kind of like a graduation-type of season into actually becoming a baseball player, because they actually learned situational baseball, and they learned how to overcome the emotional part of making errors, striking out, learning how to bounce back and still preform,” Johnson said.

He expressed optimism for the team, and explained the goal for the baseball program.

“I think right now with the team we had this year for 10 and under, if those guys can stick together and continue to build chemistry, I think they will really be something special,” Johnson said. “Because, a lot of those guys played more than one position, the way we developed them, and a lot of them can play, skillfully, more than one position.”
Johnson’s goal with this is, according to him, “My perfect idea of the whole thing is creating a pipeline brand of baseball, that will transcend from the recreation department to high school level, so we can again make it Final Fours and state championships.”

Johnson does have his personal reasons for coaching.

“My reason behind wanting to help out and volunteer is to give back what the game of baseball has given to me,” he said. “It’s given me opportunities to play at the collegiate level, as well as help pay for some of my education. I want to give that back and help instill the values, morals and principles in these young men so that, not only can they become better baseball players, but they can become better young men.”